Malique Thompson-Dwyer only does reality TV for money

Malique Thompson-Dwyer admitted he does reality TV for the cash, after taking part in 'I'm A Celebrity Get Me Out of Here', 'Celebs Go Dating', and 'Celebs on the Farm'.

Malique Thompson-Dwyer admitted he does reality TV for the cash. The former 'Hollyoaks' star has starred in three reality shows - including 'I'm A Celebrity Get Me Out of Here' in 2018, 'Celebs Go Dating' in 2020, and the upcoming 'Celebs on the Farm' this week - but has insisted he only signs up for the shows to gain exposure.

He told the Daily Star newspaper's Hot TV column: “Doing reality shows like this – let’s be honest, it’s for the money and the exposure. They’re good because you meet people and it’s a good experience. But it’s just fun. Acting is what I started out doing and that’s my passion.”

The 23-year-old actor was the second star to be eliminated from the 18th series of 'I'm A Celeb', but was happy to leave the Australian jungle and much preferred his time on an English farmyard for 'Celebs on the Farm'.

He said: “I was starving half the time. I was getting heat stroke. It was pretty much s***. This experience topped 'I’m A Celebrity'. I was connecting with lovely people. It’s an experience that will always be in my heart. I loved the people, the vibes, the energies.”

The upcoming series will see a handful of celebrities on a farm in the Yorkshire Dales to compete in a series of team and individual challenges.

Together, they will have to milk goats and breed pigs under the watchful eye of judge and farmer Chris Jeffery.

Chris will eliminate the celebrities one by one until a winner is crowned based on their animal handling and manual work.

Since filming the reality show, Kerry Katona has plans to buy her own farmland, saying: "I just never had one down day, so much so that I went online looking for a farm to buy! I found loads, I'm just trying to convince my partner now, but he's having none of it. "I want to go from queen of the jungle to farmer’s wife! I’m serious! I actually would." 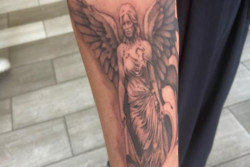 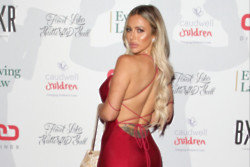