'Downton Abbey' creator Julian Fellowes has confirmed he has started working on the big screen adaptation of the period drama while waiting for the "green light" from movie bosses.

Julian Fellowes has started writing the script for the 'Downton Abbey' movie. Rumours of the period drama being adapted into a big screen blockbuster have been circulating since the series ended in 2015 following a successful five-year run, but now fans can finally get excited as the screenwriter has started penning the plot.

Speaking to The Guardian newspaper, the 67-year-old creator said: "I've done some work on the script because I don't want to find there's a green light and no script ready. But we're still waiting for that green light from the studio. Then the biggest difficulty will be rounding up all the cast as, compared with most series, it has such a large cast. And it needs them to feel Downtonesque."

The period drama was a huge success in the UK and overseas, while it also turned the likes of Hugh Bonneville and Jessica Brown Findlay into household names.

But, despite the speculation, it wasn't just fans being kept in the dark about the movie plans as Laura Carmichael - who starred as Lady Edith Crawley in the series - insisted earlier this year that she had not seen any tangible proof of the film being made.

However, not all of the actors are keen to return to the adaptation as Dame Maggie Smith, 82 - who played Violet Crawley - is in two minds about a big screen version because she is convinced it may come across as trying to squeeze the series "dry."

Speaking at the BFI & Radio Times Festival in London in March, she said: "I just think it's squeezing it dry. I don't know what it could possibly be." 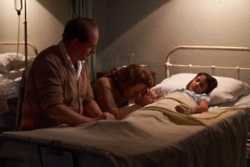