Heartbreak ahead for Leanne Tilsley and Steve McDonald

Leanne Tilsley and Steve McDonald's son Oliver could die on 'Coronation Street', after he was diagnosed with Mitochondrial disease.

There is heartbreak in store for the pair, played by Jane Danson and Simon Gregson, when their son is diagnosed with Mitochondrial disease, which affects the heart, brain, muscles and lungs and can lead to seizures, atypical cerebral palsy, autistic features, developmental problems, fainting and temperature instability.

And show boss Iain Macleod admitted that Oliver will have a "seriously limited lifespan".

He told Metro.co.uk: "In Oliver's case it was latent from first then manifest at three or four. There are hundreds, maybe thousands of strands so his case is different. He was been asymptomatic but his diagnosis means he is going to have a seriously limited lifespan."

And Iain revealed the diagnosis will cause trouble for Leanne and Steve in their relationships with Nick Tilsley and Tracy Barlow.

He explained: "It then goes on with how everyone copes with that - Leanne and Steve are bonded tightly more than ever and the difficulty is Tracy and Nick feel shut out from that little triangle.' 'But it makes you the worst person in the world to express that so they try to support the one they love while keeping their own emotions to the side. Everyone will be permanently changed behind it but after they've been through the fire these relationships are lifelong and once you have been through something like this, it will make them stronger than ever before."

Iain previously revealed the soap wanted to "do justice" to those families dealing with life-limiting illnesses of a loved one.

He said: "This is a story about a family coming to terms with the most difficult news anyone can face and the ways in which this strengthens and shatters relationships in unpredictable ways.

"Above all, we wanted to do justice to the stories of the many thousands of families who have to deal with diagnoses similar to Oliver's, be it a mitochondrial disorder or another life-limiting condition." 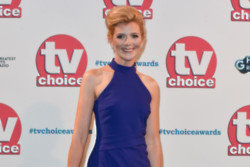 Robert Beck 'too bald' to be Coronation Street body double