That's according to 'Corrie' director Nickie Lister, who admits the hard-hitting scene, in which Kylie - played by Paula Lane - was stabbed to death, and died in the arms of her husband David Platt (Jack).

"Jack is quite a switch on and switch off actor, he's very professional.

"It was the one scene, I think, that surprised him as much as it surprised us. That really took him into a dark place.

"His scream on the street when the camera pulled away ..."

And the crew were also in tears for real following Kylie's passing in 2016.

Nickie added to the Coronation Street Blog: "It took a good 10 minutes for everyone to stop crying after that."

Jack shared a snap of the pair together, and he captioned the image: "Platts on mass! Went to see Paula, in her kinky boots tour at the opera house in Manchester, wow, what a brilliant show, you made us all proud! (sic)"

Paula also appeared to be delighted at the reunion, and took to Instagram to share the same picture. 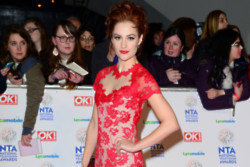 Paula Lane to make TV comeback in Call The Midwife