Bill Roache has revealed he went through a stage on 'Coronation Street' whereby he got "really nervous" and started to forget his lines, 20 years into portraying Ken Barlow.

Bill Roache went through a phase of getting "really nervous" on the 'Coronation Street' set and forgetting his lines after 20 years on the soap.

The 86-year-old actor has portrayed Ken Barlow on the ITV soap for 58 years since the serial drama's first-ever episode in December 1960, but believes actors can forget their lines at any point in their career, no matter how long they have portrayed a role for.

He said: "A lot of actors, I remember Laurence Olivier went through a phase, it's all about memory and suddenly that can go.

"You can get really, really, nervous and before scenes you start getting more and more nervous and you forget your lines even more.

"After 20 years of 'Coronation Street', I went through a phase where I was just forgetting my lines. It's not an easy one."

Bill believes "fear" is the reason he started to stumble on his lines, but after telling himself he "loves learning lines" and "loves performing" he got through the issue.

Speaking in a YouTube video for the Coronation Street Blog, he added: "The answer is fear. You've let fear in. And fear, actually when you face it, doesn't exist. Fear only exists when you feed it and when you allow it.

"The opposite of fear is love. Love in the true, big, powerful, creative sense. If you start to bring love into that, I work on the fact I love acting, love learning my lines, I love remembering them, I love performing.

"I poured love into it and it gradually got better and better, and I got through it.

"Fear cannot exist where there is love. It's a big, powerful thing to know that. Use it, it works." 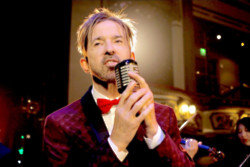