On Sunday, season 6 of The Walking Dead will come to a close with a feature-length 90 minute episode, featuring the arrival of a character fans have been waiting for, for quite some time - Negan.

Portrayed in the show by Jeffrey Dean Morgan, little teases about the character's arrival have been given in the past few days, and now lead actor Andrew Lincoln who plays Rick Grimes in the series has opened up to Entertainment Weekly about the casting and dark tone ahead.

Also chatting about Morgan joining the cast, he added: "He's just the coolest guy and everybody loves him... Jeffrey's such a great guy and I've been a huge admirer of his since he played the Comedian [in Watchmen] and everything else he's done. We're going to have a lot of fun. Honestly, we are so thrilled to have him. We're lucky people."

In the comic book world, Negan made his debut in 2012 and quickly showed what type of character he was, picking up his trusty barbed wire baseball bat to take revenge on Rick's group for the deaths his group, The Saviors had suffered.

Eventually settling on Glenn, he caved in Glenn's head with the bat and sent a huge ripple through the fan community. Whether or not the television series will stick exactly to that story, or if a different character altogether will be taken out, remains to be seen.

The Walking Dead season 6 concludes on AMC this Sunday, April 3 in the US at 9pm and follows in the UK at 9pm on FOX, Monday April 4. 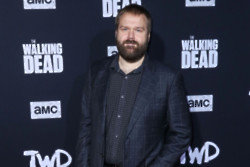