Former 'Coronation Street' actress Amanda Barrie has remembered her "so talented" pal Dame Barbara Windsor, who has died aged 83, and joked she used to be late into work in the 1950s - despite the pai

Amanda Barrie has remembered her 63-year friendship with Dame Barbara Windsor, and she jokingly recalled how her friend used to be late in when they worked together in the 1950s - despite starting at midnight. The former 'Coronation Street' actress first met Barbara, who passed away on Thursday (10.12.20) aged 83 following a long battle with Alzheimer’s, when they worked in Danny La Rue's club Winston's in 1957, and she has praised the late star for being "so talented".

She said: "I knew her for a very long time, probably the longest actually. We met when we worked at Winston’s nightclub off Bond street, 1957 we worked together.

"She was just so talented, it was amazing to actually see this little tiny creature, fearless creature with all this talent.

"She was like a toy, she was this little person that just went ‘zoom’ up there on stage. That talent stayed with her, she was such a good actress ... I think she could have had three different careers Barbara, to be quite honest."

Amanda joked: "We used to start about midnight, but Barbara was usually late in."She was never on time."

Amanda, 85, revealed how the pair had to change in the meat safe, so they would have steak blood dripping all over their costumes.

She said: "Although it looked so glamorous outside, we dressed in a little tiny room, all of us, the strippers, everybody. I used to sit next to Barbara.

"Actually it was the meat safe, it wasn’t the dressing room … they’d come in to get some steaks and over our heads would be dripping in blood.

"Barbara would be like, ‘Mind my make up!’ It wasn’t quite so glamorous backstage as it was out there.

"I look back to the two of us coming out of the club at four o'clock in the morning, both in mini skirts, three-inch heels and three-inch eyelashes, mincing down Old Compton Street with all the prostitutes, I would rather remember Barbara that way to be honest."

Amanda tipped Barbara to be made a dame back in the 1950s when they worked together, and joked she would be "worth a fortune" if she had been able to put a bet on it happening all those decades ago.

Speaking on 'Good Morning Britain', Amanda added: "I was in awe of Barbara, even though I am slightly older than her. She always felt much older than me because she was so superior.

"What she meant, in a funny sort of way, if I think about Barbara, she was part of my youth, that part of your life when everything is in front of you ... in our case both of us were lucky, that is a bond you sort of keep as we both started off the same way.

"I did say to Barbara the last time I saw her, I said, ‘If anybody had let me put money on at Ladbrokes when we were at Winston’s that you were going to be a dame, I would be worth a fortune.’ A less likely dame you’ve ever met.

"Us toddling round in those mini skirts and heels and eyelashes. That was a good dame." 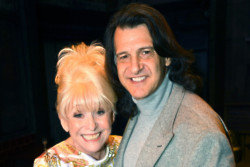 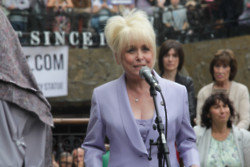