John Partridge has called for 'EastEnders' bosses to fill the gap left by his and Marc Elliott's departures by casting more gay characters.

The 41-year-old actor quit his role of Christian Clarke after almost five years last year, along with co-star Marc Elliott, who played his on-screen lover Syed Masood, and has called for show bosses to fill the gap left by their departure with new homosexual characters.

He said: "Bring in hot new gays, that's what I say. Everyone needs to be represented - so somebody's got to come flying that pink flag."

John was delighted by the popularity of Christian and Syed and doesn't think their sexuality mattered to soap fans.

He added to The Sun newspaper: "We only ever had a positive response from people.

"It became a love story and the fact that it was two men became immaterial.

"It really became something that was quite beautiful as opposed to sensational."

Since leaving 'EastEnders', John has been appearing in pantomime and later this year he will return to his musical theatre roots in West End show 'A Chorus Line', as well as undertaking one-man show 'Dames 'n' Dudes' in London in April, and he is delighted by the opportunities that have come his way.

He said: "After doing pantomime, I'm going straight into 'A Chorus Line' at the London Palladium. It's great to go back into musical theatre. I play Zach - which is the Michael Douglas role - so I'm the only person who doesn't sing or dance.

"I'm so excited about new things to come. What with 'A Chorus Line', my own show and everything else, leaving 'EastEnders' proved to be the right decision." 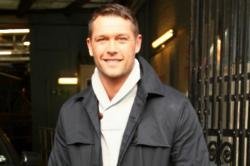