Jon Bernthal on his role in Marvel's Daredevil as The Punisher

Netflix's take on the Marvel Cinematic Universe is going extremely well. The first season of Daredevil and Jessica Jones respectively gained immense praise and now, the second season of Daredevil is right around the corner, with Marvel's Luke Cage also scheduled to debut at some point later in the year.

This time round, the show will be introducing Frank Castle AKA The Punisher into the mix, with Jon Bernthal taking on the role.

Speaking with Marvel.com about the real world things he may have drawn upon for the character, he explained: "Well, I think that, fortunately and unfortunately, a dark headspace is nothing new to me. I have some experience with it in the characters that I've gotten to play and each one is so different and each one, I think, sort of requires its own process and its own method to get involved [in].

"I will say that being a father and being a father of young kids, it's a real game-changer for me. With a character like this, the trauma that he's suffering from and what this man has gone through, I'm extremely grateful that this opportunity came to me after I was a father. I think it's essential in playing the part and understanding what it would mean to fail your family in that way and to lose your family on your watch and how serious that is."

He continued: "I think that another part is really trying to empathise and try to understand through every avenue that's made available to you what it means to be a veteran of war and to see real war combat. This is a character that's extremely important to the military and extremely important to members of law enforcement. This character, he means a lot to a lot of people.

"So there were a lot of days, in Brooklyn, when I first got there, [where I'd] be putting on fifty, sixty pound weights on my back and just walking back and forth over the Brooklyn Bridge, talking to myself. My own little crazy ways of getting into the character. This is a real responsibility and a real honour for me, and I just hope [with] all the hard work, that we got some of it right."

Noting that what Charlie Cox has done with the character Matt Murdock and his vigilante alter ego Daredevil is "so special", he notes that his character could be compared to Murdock as the pair have both "gone through real trauma in their lives".

Bernthal comments: "A big part of Matt Murdock is he needs to be one very bad day away from being Frank Castle. That's the crux of their conflict: 'You don't know what I've been through. You don't know what I'm all about. Get out of my way.' And this sort of concern for the greater good is something that I think is secondary to this man at this point. What's interesting is you find these two characters that are so alike and so different and then when they collide, they just learn from each other."

"It was a constant sort of effort with me that if I fought for anything this season, that's what I really fought for, is to be bold enough to stand or to risk losing the audience and to go full out, because I knew at the end of the day where this guy was coming from was a genuine place."

Marvel's Daredevil season 2 debuts on Netflix on March 18 in all territories where the streaming service is available. 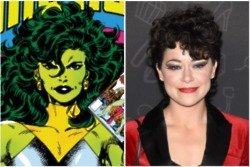 Everything we know about upcoming Marvel Studios series She-Hulk