Making their way onto our television screens year after year with some brilliant cowboy hats and fashionable boots, sheriffs are perhaps some of the most complex and intriguing characters on the small screen.

With so many to choose from, we've decided to whittle it down to our top five favourites from television present and past. Check out who we love below.

Played by the handsome Antony Starr, Hood's the breakout lead star from Banshee who epitomises the term anti-hero. Taking on the identity of a deceased sheriff, he embraced his criminal values and combined them with his dodgy past to further his game. Though his take on law enforcement isn't for everybody, he certainly gets the job done, with a bit of charismatic charm thrown in for good measure.

The ultimate 'love to hate' character for all Veronica Mars fans, Michael Muhney did brilliantly well in engaging with the audience through his portrayal of Don Lamb. Corrupt, egocentric and status hungry, he didn't let enemies get away without at least a good tongue lashing - often entertaining because of his witty banter.

3) Once Upon A Time's Graham Humbert

Back before Jamie Dornan had put his name to the strange Christan Grey, he played this rogue type Sheriff who defied the Evil Queen's wishes in Once Upon A Time. A true martyr of the cause, his good deeds don't go unpunished, and he was left crushed by the woman who he thought loved him.

In the middle of utter chaos, a group of survivors needed somebody to turn to, and Rick Grimes was that man. Waking up from a coma in the middle of a zombie apocolypse, it's strange just how quickly Rick got into the groove of surviving against all of the odds - and his performance on the show is truly something to be admired.

More than just another immortal vampire, Alexander Skarsgard's take on 1,100 year old Eric Northam was one of the most epic vampire portrayals to ever hit the small screen. Completely in love with Sookie Stackhouse, he provided a lot of laughter, horror and sexual appeal when the True Blood series aired - why did it ever have to end? 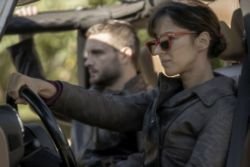