It’s been a decade and a half since we lost the great Eddie Guerrero. As one of the most versatile performers the wrestling world has ever seen, he left a legacy behind so great it will forever go down in history, for fans of the sport both old and new to look back on and marvel over.

Harnessing an incredible duality as a performer, Guerrero put in some iconic work both as a face and a heel during his time in the squared circle, going up against some of the most recognisable names in wrestling and bringing the best out of them thanks to his incomparable ability.

Flamboyant, charismatic and a technical high-flyer, he’s always been awe-inspiring to watch. With that in mind, as we remember his career, we’ve taken a look back at some of his all-time best matches that any fan of wrestling just has to see.

Billed as a 'Latino Heat Parking Lot Brawl', this match was packed full of fun moments and memorable spots. Bouncing one another off of a bunch of different vehicles, the pair put their all into making the battle something those in attendance would go home talking about.

After being suplexed on top of a car and being attacked with a lawnmower, Guerrero still managed to come back and get his revenge on Cena, who had been humiliating him in recent weeks.

A frog splash off the bonnet of one of the motors onto the hood of another was enough to put the rising star away.

Though some idiot fan decided to get involved in this Ladder Match for the Intercontinental Championship, they didn’t do enough to pull away from the brilliance both Guerrero and RVD displayed during their match-up here.

Guerrero took a ladder to the face and body multiple times throughout the fight, which even saw RVD performing a monkey flip on Guerrero, launching him into the weapon which was leaning against the corner of the ring.

Bloodthirsty fans got their wish of seeing the red splatter as Guerrero was busted open, in one of the most dangerous matches of his career. He was certainly a man willing to put it all on the line in the name of sports entertainment.

The feud between Guerrero and Edge had been going on for some time when the pair reached their rivalry’s conclusion on September 26th 2002, so audiences were expecting something big for the finale. What was originally billed as a normal match between the two turned into something else altogether when the No Disqualifications stipulation was added.

Metal chairs and ladders combined to make for some highly-volatile spots, including a sit-up powerbomb from Guerrero to Edge from the top of one of the ladders. The audience at the show were all-in for this bout, which is still mightily impressive to this day.

Putting the underdog Guerrero against one of the finest grapplers in wrestling history in Angle was always going to be a must-watch match.

With Guerrero’s WWE Championship on the line, he had to work harder than ever before to outwit and outlast his opponent here, delivering a technical performance unlike any other in his past.

Though his lower leg had been worked on considerably by the challenger, Guerrero managed to retain the title with a sneaky roll-up to win the match, bending the rules ever-so-slightly to help cash in the win.

Some may argue that Guerrero was at his best when he was playing the villain, and that’s hard to deny when you check out this classic between him and his best friend, turned enemy, turned frenemy Mysterio at Halloween Havoc.

Guerrero put his WCW Cruiserweight Championship on the line here, up against Mysterio’s mask; if Guerrero were able to tear the mask from his opponent’s face, he would not only win the match, but shame him in the most disrespectful way possible.

This was one of the very few times in Guerrero’s career that we were actually cheering for the other man to win; and doesn’t that show just how much of a brilliant performer the man was, no matter his role?

Check out all of these matches and more using the WWE Network, free for one month to new subscribers and £9.99 per month thereafter. 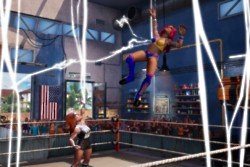