Africa ends tonight on BBC One and while it’s provided us with more heartbreak, drama and excitement than pretty much any other TV this January, it’s reminded us of just one more thing. Just how much we’re going to miss Sir David Attenborough when he finally decides to hang up his boots and stop going on safari.

While the show’s final episode focuses on the future of Africa’s wildlife, the BBC have been looking at the future of their award winning and spectacular nature programming for some time now, trying out presenters and voice overs to try and make the inevitable retirement of Sir Attenborough. The reason why the search has been so hard is that the man is so hard to replace.

Just watch the ending of Sir David on his hands and knees communicating a blind baby rhino and both not well up and not wonder how the BBC will ever cope without him.

While they might have found a successor that Attenborough himself is willing to pass the baton to in the form of Brian Cox, not even his boyish enthusiasm would be enough to make up for the loss of what might be the greatest TV presenter out there.

Think about it, has anyone else made as many iconic TV moments as Attenborough? Not that we can think of. His dulcet tones and unique delivery have become synonymous with the world of the nature documentary, so much so that his is the voice anyone uses while trying to mock them.

While we’ve no word as to when Sir David will be signing off for the last time, that day must be getting pretty soon, with him turning 87 in a matter of a three months. He may look as enthusiastic as ever, but surely he can’t keep going for years to come.

The real answer is that no one will be able to replace Sir Attenborough, as he’s not someone you can replace. The trick for whoever will be given the task of leading the line will be not only coming up with their own spin, but making it half as engaging and absorbing as Sir David has made his over the decades.

A challenge we wouldn’t take on for all the money in the world. We’re going to miss you Sir David when you finally make the call. 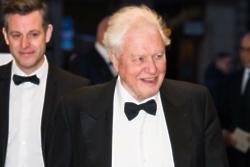