Former 'Spooks' actress Lisa Faulkner has revealed since winning this year's 'Celebrity MasterChef' she has been offered a job by judges John Torode and Gregg Wallace.

Lisa Faulkner has been offered a job by the 'MasterChef' judges.

It was so weird because, you know, they told me I'd won and we went out and had some drinks with the crew, and then I wasn't allowed to mention it to anyone.

The former 'Spooks' star - was crowned this year's 'Celebrity MasterChef' champion - has revealed that judges John Torode and Gregg Wallace have both invited her to work alongside them in their restaurants.

She explained: "They said that I could come and work in their kitchens, so I'd love to take them up on that, but I'm hoping that it doesn't mean just chopping veg or washing pots.

"I think the thing is that I'm desperate to just keep learning, because I've got this whole passion for cooking and I just want to keep doing it, and so they've said 'Come and work in the kitchens if you want to do that', because I just go into restaurants now and go 'Can I come and see the kitchen, can I do some work in there?' because it is just amazing."

The blonde actress - who shot to fame while appearing in popular dramas 'Brookside' and 'Holby City' - admits winning the competition was a "weird" experience, as she wasn't allowed to tell anyone about it.

She explained to Absolute Radio host Christian O'Connell: "It was so weird because, you know, they told me I'd won and we went out and had some drinks with the crew, and then I wasn't allowed to mention it to anyone." 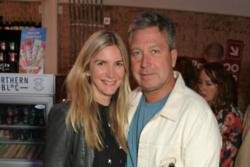