In honour of Halloween, Hotels.com has searched the globe for the world’s scariest hotels and here are ten of the spookiest

Whether you’re looking to stay in the UK or travel abroad, these spook-tacular hotels are guaranteed to send a chill down the spine of even the most thrill-seeking travellers.

Have you stayed in any spooky hotels?

This neo-Georgian hotel offers spectacular views out across the Rocky Mountains, but is best known not for its panorama, but for its history. It was during his stay in Room 217 of the Stanley Hotel that Stephen King had the inspiration for his famous horror novel ‘The Shining’. The hotel does its best to live up to its spooky reputation, with Stanley Kubrick’s interpretation of the film playing on a continuous loop on Channel 42 in all guestrooms and guided ghost tours of the underground tunnels.

Lovers of vampire lore will adore this stark and isolated hotel. Located in the picturesque village of Bran in the heart of Romania, guests can steep themselves in the history and mystery of Romania’s most famous fictional figure – Count Dracula. The Transylvanian Inn overlooks the castle of Vlad III, the inspiration for Bram Stoker’s famous 1897 novel.

The luxurious Taj Mahal Palace is a favourite with many celebrities while visiting India, but is arguably better known for its ghostly apparition.  French architect W. A. Chamberman designed the building, but was horrified to find that when constructing it the front portion had been built facing the wrong direction. His dramatic response was to commit suicide, and his ghost is regularly sighted haunting the old wing.

Known as ‘The Grey Ghost’, this luxury cruiser, now permanently docked at Long Beach is frequently the subject of ghostly rumours. Guests claim to have seen the ghosts of two girls who died in the pool and witnessed a ghostly woman running through the salon.  It is also said that you can hear the creepy clanking sounds from the engine room where a young sailor tragically died.

5. The Driskill, Austin, Texas, US

Thrillseekers will have their pick of ghosts to keep their eyes peeled for during a stay at The Driskill. Spirits spotted include the ghost of a young woman who shot herself in Room 29, and that of a US Senator’s daughter who died at the tender age of four. The most famous apparition to be seen is Jesse Driskill, the original hotel owner who was so attached to the hotel he chose to remain there after death.

This beautiful mansion just outside of Uppsala is said to be under the supernatural protection of the White Lady. There have been several reports of this friendly frightener joking with guests by setting the chandelier to swing and rattling the cutlery in the kitchen. Guests looking to dine in the Pink Dining room will be able to observe the White Lady’s own dinner set, occupying prime space on the best table in the establishment.

This imposing Victorian building was once the largest building in London and was the setting for several of Arthur Conan Doyle’s Sherlock Holmes tales.  Thrill seekers should request Room 333; during his stay in 2003 radio broadcaster James Alexander Gordon was confronted by an apparition of an Edwardian gentleman, and since he recounted his adventure several other guests of the room have reported similar occurrences.

Selsdon Park Hotel is rumoured to be haunted by a Tudor maid who had an affair with the owner’s son and threw herself out of a window after he dumped her when she became pregnant. Several of the staff swear they have seen the ghost of the Grey Lady, and the hotel has featured on many TV programmes on paranormal activity.

The ghost of highwayman Claude Duvall is said to roam the corridors at the historic Holt Hotel. Duvall was the leader of a notorious gang and was thought to be responsible for many murders, including those of the landlord and his wife in 1754. Those of a nervous disposition should avoid the Holt Hotel, as previous guests have reported the sensation of being watched, and one man felt his bed shake fiercely in the middle of the night.

A stay at this turreted Victorian Gothic hotel is guaranteed to send shivers down the spine of even the most unimpressionable guests. A ghost known as the Blue Lady roams the north wing of the country house, said to be that of lady maid Eliza Kleininger, who died trying to rescue her jewellery box during a fire in 1886. 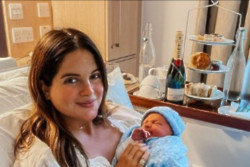 Texas' Sharleen Spiteri is 'sick' with nerves over new album