Last night saw the epic New Found Glory take a step back from their usual 1,000+ capacity venues for an ‘up close and personal’ tour of the UK alongside Welsh superstars, Kids In Glass Houses.

Stepping out of the rain into Manchester Club Academy, I was dreading that smell of stale, wet, sweaty bodies that always seem to be about a million times worse after a torrential downpour.

However, the show wasn’t about the bodies crammed in front of the stage in the hope of touching Jordan Pundik, it was about the guys in New Found Glory getting “up, close and personal” with their army of fans who had woken up uber-early to snap up a ticket before anyone else.

In the room were the ‘die hard’ New Found Glory fans, the ones who knew the word to each and every song, and after seeing the guys only a few months ago at Academy One, it really was a humbling experience to be a part of it all.

Kids In Glass Houses were as good as ever, and their new single Sunshine; which got a preview play, looks set to please their fans, as well a those ‘on the fence’ lot who live off typical American emo pop rock… except KIGH aren’t American. 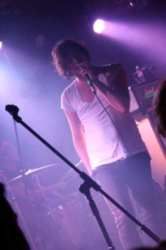 Having seen them support Fall Out Boy at the Manchester Evening News Arena, I’d wondered if it was just the big stage and fancy lights that had made me fall for Aled Phillips’ vocals, but seeing them play such a small venue made the butterflies in my tummy quite real, and I’ve got to admit, I will be popping down to my local HMV this weekend and sourcing a copy of their album!

New Found Glory were as wonderful as ever, playing tracks from their entire back catalogue whilst entertaining the various stage divers who revelled in every moment they could get on stage with the guys, and despite various warnings from the band about the people at the front, kept coming forward. 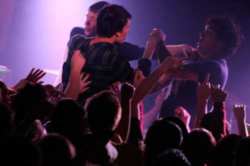 Whilst I can warble on for hours on end about how epic New Found Glory are live, it was my friend - who had never seen or heard of them before - that summed up the night perfectly; “Well I’m glad I got out of my pyjamas for that!” 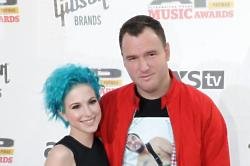