"WE MADE IT!" Stars On Top Of Killimanjaro

Brave celebs climbing Mount Kilimanjaro have battled through harsh blizzards to reach the 19, 340-foot-high African Peak, all to raise awareness for the world's water crisis.

Philanthropic singer Kenna led a team of celebrities, including actors Emile Hirsch and Jessica Biel, rapper Lupe Fiasco and Santigold star Santi White, among others, up to the Tanzanian peak for the Summit on the Summit: Kilimanjaro campaign.

On Thursday the group began their journey to raise awareness of Africa's chronic water shortage. The stars used the latest social networking technology to update fans and followers along the way, and on Monday White revealed via Twitter.com the group was trudging through a blizzard that slowed their progress.

However, the stars proclaimed their triumph at 8:24 pm local time on - appearing in a picture posted on the campaign's official Twitter.com page.

The posting reads: "The SUMMIT ON THE SUMMIT Team has reached the top of Mt Kili! A great moment captured." Kenna, who previously attempted the feat in 2005 but failed, has also claimed victory. 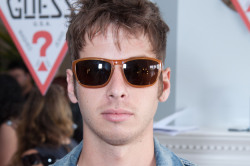