Adam Ant's comeback London video shoot was nearly cancelled on Sunday (28.10.12) after he received terrifying threats from a crazed fan, who sent shocking images of the 'Prince Charming' hitmaker dres

Adam Ant's comeback video shoot was nearly cancelled on Sunday (28.10.12) after he received terrifying threats from a crazed fan.

The pop icon's team of bouncers and former SAS guards - who dressed as Victorian gentlemen and Edwardian noblemen to blend in with his latest look - were forced to call emergency security officials to London's Hoxton Hall to protect him from the keen supporter, who sent in bizarre images of the legendary singer dressed as a dead zombie with blood pouring out of his eye and mouth.

Adam - whose real name is Stuart Goddard - had openly discussed plans to shoot the video for comeback single 'Cool Zombie' on Twitter, but as soon as he released information he began to receive threats and pictures from the crazed fan.

A source close to Adam said: "At first, Adam began receiving messages online from the fan, but as we got closer to the shoot things got a bit more sinister - she was sending cutouts of Adam's head put on zombie characters from films, and then she began saying that she'd be at the video shoot if he didn't return her letters.

"Adam has a lot of hugely devoted fans and, every so often, one oversteps the mark. It's not the first time it's happened to him but it's always a shock when it does."

The 57-year-old singer decided to push ahead with the shoot at Hoxton Hall, but with a strengthened security team on hand all day.

The video features an 'end of the world saloon' populated by groups of stragglers from throughout the ages.

The source added: "It was handy as it gave us a chance to have our security team on set at all times.

"The guys said it was the first time they'd ever carried out protection work while dressed as Victorian dandies."

Adam has talked out about his stalkers before - and even left his Los Angeles home to return to Britain after a fan made his life hell.

He said about the US incident: "I had a very bad episode with a stalker, which was the deciding factor in my coming back to the UK.

"I would usually say attention comes with the territory, but this was the kind that invades on your human rights. It was a bad phase for me; and one of the landmark cases that helped change stalking laws." 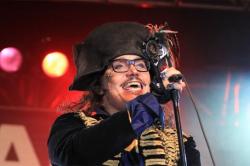