The Who have put a twist on 'My Generation' on new song 'I Don't Wanna Get Wise'. The iconic band's chief songwriter and guitarist, Pete Townshend, has explained how the new track from the band's upcoming first album of new material in 13 years, 'Who', is a spin on their 1965 hit.

Instead of being about "not wanting to die before you get old", 'I Don't Wanna Get Wise' is written from a young person's perspective and is about that "discomforting" feeling when you realise you "know nothing" as you look to the future.

Speaking during 'An Evening with Pete Townshend' event, hosted by Mariella Frostrup, in London, the 'Baba O'Riley' hitmaker explained: "A couple of songs on the album, one of them is called I Don't Wanna Get Wise'.

"It's written from a voice of a young man who's looking ahead.

"It's kind of a twist on 'My Generation'.

"If 'My Generation' is about not wanting to die before I get old, I would prefer to be dead rather than end up like you guys.

"If that's what the twist is I don't want to be self-satisfied and not looking past into the future.

"I Don't Wanna Get Wise' is about a young person looking at an old person and thinking, I don't wanna end up like you thinking that you have to old-splain everything to me.

"It's about what happens when you get older.

"All of you young people I could help you.

"I've been here such a long time, I've seen it all I've done it all, and it's that sense that it isn't wisdom, it's quite discomforting because you realise you know nothing.

The 'Age of Anxiety' author added how he is a "very, very strong powerful man" but he still hasn't got over things that happened to him as a boy.

He said: "I still haven't got over the fact that when I was four-and-a-half someone treated me really badly, you know what I mean, self-pity whingey little kid.

"I feel like a very, very strong powerful man.

"I am a very, very strong powerful man.

"I'm 74, there's probably very few people whose wallet I couldn't steal and run so fast that you wouldn't be able to catch me up. I'm a very very fast runner."

And asked how he feels about "being the author" of the line, 'I hope I die before I get old', Townshend admitted: "I said you know, I don't think that was about dying before you get old but there's dying because the older generation I feel had got it wrong."

The album 'Who' is released on December 6. 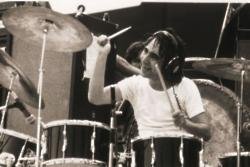