Trent Reznor still thinks about his late friend David Bowie "all the time".

Trent Reznor still thinks about David Bowie "all the time".

The Nine Inch Nails singer knew his recent track 'God Break Down the Door' - on which he plays saxophone - would remind people of his late friend, who died of cancer in January 2016.

He said: "The decision to do the Bowie-esque, croony vocal was just f***ing around initially without the intent of it ever going to the outside world. And Atticus spoke up and said, 'You gotta keep that.'

"I knew it would [remind people of Bowie]. I mean, I still think about that man all the time."

And the 'Mr. Self Destruct' rocker admitted the passing of the musical icon felt almost like a member of his own family had died and explained how the deaths of certain people in the public eye is a huge loss to society.

He said in an interview with Rolling Stone magazine: "Let's first talk about Anthony Bourdain. I never met him. But I liked the world with him in it better. I liked knowing he was out there in some fashion, especially in these times. That's a loss; culturally, we needed that voice.

"With Bowie, I did know him to a degree. I certainly studied his work and continued to do so.

"It felt like, 'Man, we weren't done. There's more to go. I needed you in the world.' It was like a family member almost.

"There are these people that you feel you can rely on out there - not for support necessarily, but it's good to know they're experiencing life as we're in semi-uncertain times and even when we aren't. I think about that a lot." 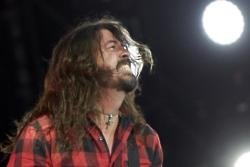