Stereophonics wouldn't do Smiths cover because they eat too much meat

The Stereophonics' Kelly Jones has admitted they would never do a Smith's cover because they "eat too much meat."

The 41-year-old frontman has ruled out doing a rendition of one of the vegetarian rock band's songs because they quite often tuck into animal flesh while performing on stage and he thinks former lead singer Morrissey, who has compared eating meat to paedophilia in the past, wouldn't "like it."

Asked whether the band would do a Smith's cover, Kelly told Chris Moyles on Radio X: "We eat too much meat. We got meat on stage, we can't do it, he won't like it."

Pushed on whether he thought performing a Smith's song with his band would be really "sacrilegious", Kelly revealed a time when he and his band mates - consisting of Richard Jones, Adam Zindani, Jamie Morrison and touring member Tony Kirkham - strapped meat to a vegetarian lighting engineer while he was sleeping in his bunk bed.

He explained: "We had a vegetarian lighting engineer once and we gaffer tapped him to his bunk with Parma ham and sausages and he couldn't get out."

Meanwhile, the Stereophonics' new album 'Keep The Village Alive' went straight into the number one hot spot in the UK charts following the release earlier this month. 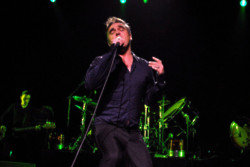