Serge Pizzorno has started work on next Kasabian LP

Serge Pizzorno has started writing the new Kasabian album after taking a break following their tour for 2017 LP 'For Crying Out Loud'.

The 'Fire' hitmakers have been on an extended break since touring their 2017 LP 'For Crying Out Loud' and although the guitarist used the hiatus to work on his debut solo album, things have gone so well he's now turned his attention to the group's seventh studio record.

Speaking to the new issue of Q magazine, he said: "It's really exciting. I'm in an amazing space where if I go into the studio, something's going to happen. They're good times because they're rare - usually it's an absolute slog."

Serge recently admitted penning tracks for his solo album, 'The S.L.P.' took him out of his "comfort zone" and will mean he can bring a whole new perspective to the 'Processed Beats' group when they hit the studio again.

He said: "If something feels good, then you should follow the art. Great zones don't come from comfort zones. This feels great now, and it's great that I've got the time to do it. Kasabian is a huge machine that we've created. There's a routine and you're safe in that place, but you need something else to happen. "Sometimes there needs to be a storm in the harbour.

"You need for everyone to go, 'Woah, what's going on?' When the day breaks, you see the clarity.

"Me having something else to do means that when we come back I'll be in a whole new headspace that wasn't possible before."

And Serge enjoyed having the "freedom" to have full creative control and said it felt like a great "luxury" being given a "little window" to experiment whilst Kasabian took a break.

He said: "Kasabian organised some time off, and I've never afforded myself that luxury - well, none of us have really. We've never stopped. I found a perfect little window to experiment and see where that took me. I just enjoyed that freedom of being able to do whatever. I had been writing notes in my phone. I was interested in people having these online personas and this perfect projection of themselves; do you know what I mean? This is what we put out there, but in reality none of us are really like that." 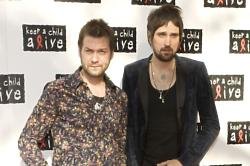