'Europa Geht Durch Mich', 'Futurology' - both of which were played throughout their current tour - and 'Let's Go To War' were well-received by the audience at the O2 Academy Brixton on Friday (11.04.14) and Saturday (12.04.14), showing a return to the Welsh trio's rockier roots following last year's more subdued and reflective album 'Rewind the Film'.

The new album, also entitled 'Futurology' doesn't yet have a release date but frontman James Dean Bradfield told the audience it will be out "in June".

The band played a crowd-pleasing, 24 track, set which spanned their entire 26-year career and had an energy and enthusiasm as fresh as their younger days, with the audience singing along to every word - and even stepping in when singer James suffered a musicianship mishap and sang his guitar line in the middle of 'Stay Beautiful'.

Elsewhere, Nicky teased fans with the possibility of some special gigs to mark the 20th anniversary of their iconic third album 'The Holy Bible', admitting "We still haven't decided whether to do any anniversary shows yet".

However, when the crowd cheered wildly, he grinned and said: "That's a no then".

The two London gigs marked the end of the 'Design For Life' hitmakers' current tour, but they have a string of European dates lined up for the coming weeks before returning to the UK for a number of festival performances, including Glastonbury and the Virgin Media V Festival. 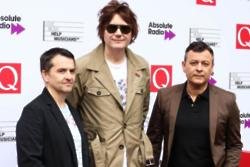