Kimberly Wyatt has said "everybody's on board" with a Pussycat Dolls reunion, though they don't yet know what they'll do together.

Kimberly Wyatt has said "everybody's on board" with a Pussycat Dolls reunion.

The 36-year-old singer has revealed that the 'Don't Cha' hitmakers - which was also comprised of Nicole Scherzinger, Jessica Sutta, Ashley Roberts and Melody Thornton - are planning on getting together for a reunion for the first time since they parted ways in 2010, although she insists that she doesn't yet know what the girl group will do together.

She said: "We've been talking but everybody has their own lives and own agendas and things. Most of everybody's on board. There's still a few steps to be taken to make it happen.

"We are all just in a place in our lives where we've been off on our own adventures and now we'd like to get on stage and have fun.

Kimberly also noted that this year is the ideal time for the group to reform, as she praised 2018 as the "year of female empowerment".

She added: "I know most of the girls are 100 per cent on board and want to make it happen. But everybody's got to be on board.

"This is the year of women. This is the year of female empowerment and I feel that from the moment I stepped on stage for the first time with the Dolls and Pink was performing with us and Carmen Electra and I was next to my best friend Ashley Roberts in my stilettos and fish nets and when that curtain opened I felt the most empowered. "It was the most I'd owned my space and sexuality and my femaleness ever before. And they gave me so much confidence to know that I can own that and I don't have to be afraid of someone taking that away.

"As long as I own my space and stand for what I stand for and I have good morals and I try and do good in the world. Pussycat Dolls really instilled a real confidence in me."

The 'Buttons' singer thinks that it's "now or never" when it comes to getting the group back together, as she's determined to spread a positive message through their music.

She told The Sun newspaper: "Pussycat Dolls hasn't always been seen as female empowerment which is a real shame which is why I say now or never. Because I think that message needs to be spread but needs to be spread in a way I fell in love with the group." 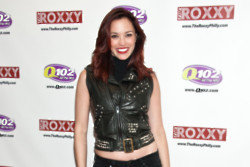