Sir Elton John unveils a surprise new three-part documentary about the creation of 'The Lockdown Sessions'.

Sir Elton John has revealed a new documentary about the creation of 'The Lockdown Sessions'. Sir Elton John is giving fans a peak behind the scenes

The 'Rocket Man' hitmaker - who collaborated with the likes of Miley Cyrus, Stevie Nicks, Eddie Vedder, Charlie Puth and more on the collection - has dropped a three-part series to document the record.

He wrote on Twitter: "Surprise! Just in time for the holidays, I'm taking you 'Inside the Lockdown Sessions'.

"Watch as I go deep into the making of my latest album with all of my collaborators.”

In the first episode - all three are available exclusively on Apple Music - he admitted he "had no intention of making an Elton John record during lockdown".

He added: "That was never gonna be the case. When I did that track with Charlie Puth at the start of the year, I never dreamed that it would lead to this."

The 74-year-old singer noted how he "made more calls during lockdown" than ever before, and it gave rise to plenty of exciting collaborations.

He recalled: "Dua Lipa, you know, we became friends after she did the Oscar party. Never thought of doing a duet with Dua Lipa - all these things, they were an accident basically."

Elton previously compared his experience to 'Back To The Future' as he found himself "becoming a session musician again" by working with other artists.

He said: “It was never an album I was gonna make, I thought, ‘I’m becoming a session musician again like I was 54 years ago, and it feels good.’

"I had no restrictions, and I actually loved playing on other people’s records. It was different sorts of music, and music and artists that I loved, so I was in my element. It was like 'Back To The Future'.

“You have to go in there with no ego when you’re playing on someone else’s record and just give them exactly what they want. But also enjoy the process too.”

Eddie Vedder says Pearl Jam will work with producer Andrew Watt on their next album. 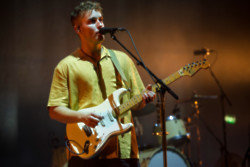