Don McLean's handwritten lyrics to 'Vincent' are set to go under the hammer with an asking price of $1.5 million (£1.2 million).

Don McLean's handwritten lyric sheets for his iconic track 'Vincent' are set to go under the hammer. The 14 pages of lyrics, which were penned in pencil, have an eye-watering asking price of $1.5 million (£1.2 million).

McLean wrote the lyrics after reading a book about the life of late painter Vincent Van Gogh.

The song - which often gets named after the lyric 'Starry, Starry Night', a reference to Gogh's world famous 'The Starry Night' painting - was released on the music legend's seminal 1971 LP 'American Pie'.

Los Angeles dealer Gary Zimet of Moments in Time - who auction off autographs, letters and manuscripts - is hosting the sale of the memorabilia which is being sold by a person who claims to have received the lyric sheets from the 74-year-old musician.

Personally, Zimet said he'd like to see the Van Gogh museum in Amsterdam buy the lyrics to put on display there.

He said: "I am hoping they buy it. They should have it. That would be ideal."

In 2018, McLean performed a duet of the timeless hit with pop superstar Ed Sheeran during his UCLA Health and Teen Cancer America benefit concert in the US.

Alongside a video of the pair, McLean wrote: "Ed & I rehearsing Vincent for the big show!

The pair had met backstage and Ed, 29 - who revealed he is a major fan of the 'Since I Don't Have You' singer - told him: "We got to play together!"

That night, McLean also performed with The Who's Roger Daltrey and Van Morrison, and he hailed the trio as his "favourite artists".

Alongside selfies with them all, he wrote: "Tonight I had the honor of performing with 3 of my favorite artists. Roger Daltrey, Ed Sheeran, and Van Morrison. They are the finest artists and the finest people I have met in this business. (sic)"

Head to momentsintime.com to check out the lyric sheet. 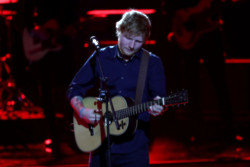