The Beatles used to sing rude words to their songs during their gigs because their shrieking fans blocked them out.

The Beatles used to sing explicit lyrics during their gigs because their fans' deafening screams drowned them out.

In the new autobiography 'The Ox: The Last of the Great Rock Stars', late Who bassist John Entwistle - who died in 2002 - recalled how the legendary Liverpool group played about with their famous lyrics during their shows and their fans were none the wiser because of their raucous shrieking.

According to the tome, the 'Hey Jude' hitmakers - Sir Paul McCartney, Sir Ringo Starr and the late John Lennon and George Harrison - changed the line in 1964's 'A Hard Day's Night' to "It's Been A Hard Day's C**k" and used another C word on 'I Wanna Hold Your Hand'.

Entwistle's band supported the 'Come Together' hitmakers in Blackpool in 1964, when Beatlemania - the name given to the incessant interest in the band in the 60s - was dominating the world.

In the book it's claimed he said: "It became apparent that The Beatles had figured that since the screaming couldn't be stopped and no one out front in the audience could possibly hear a thing, then they might as well have some fun.

The Beatles' songs were often banned by the BBC, most notably 1967's 'A Day in the Life' and 'Lucy in the Sky with Diamonds', because of drug references and 'I Am the Walrus', which features the line, "You let your knickers down."

In recent times, McCartney has released the solo single 'Fuh', but insisted he wasn't worried if it wasn't played on the radio because of its rude title.

The 77-year-old music legend was aware that there are certain DJs in the US that wouldn't give any airplay to the track from his most recently solo LP 'Egypt Station', because it features a swear word - but admitted he won't lose any sleep over it.

He said: "It needs promotion and stuff. There was a lady in America who's a very famous DJ and if she plays it it's a great thing, you know?

"However, she's very religious so they're all worried about the title 'Fuh You'. So I said: 'Well 'Fuh her!'" 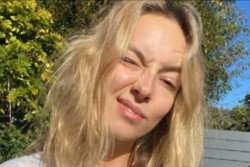