Davis, Keys, Wonder And Costner Line Up to Remember Houston At Funeral

Music mogul Clive Davis, actor Kevin Costner and singers Stevie Wonder and Alicia Keys were among those who gathered to remember the life of tragic superstar Whitney Houston during a private funeral service in her native New Jersey on Saturday (18Feb12).

With U.S. flags at half mast across the state, grieving friends and family members shuffled inside the singer's childhood place of worship, the New Hope Baptist Church, in Newark to mourn the loss of the music icon.

Bobbi Kristina Brown, Houston's 18-year-old child with ex-husband BobbyBrown, her cousin Dionne Warwick and mother Cissy were all in attendanceand the gospel veteran shared her final message to her daughter inside the funeral's programme.

It read, "I never told you that when you were born, the Holy Spirit told me that you would not be with me long. And I thank God for the beautiful flower he allowed me to raise and cherish for 48 years. Rest, my baby girl, in peace".

Houston's onoff boyfriend, R&B singer Ray J, and his sister Brandy were also present for the memorial, while New Edition star Bobby Brown made a brief appearance before leaving just 20 minutes later with two of his children from previous relationships in tow.

I never told you that when you were born, the Holy Spirit told me that you would not be with me long

Soul legend and longtime family friend Aretha Franklin was noticeably absent - the Respect hitmaker was forced to pull out as a guest and performer just hours before the event due to health issues.

The touching ceremony opened with a performance by a mass choir singingThe Lord is My Shepherd as Pastor Joe A. Carter greeted mourners.

Grammy Award-winning gospel singer and minister Donnie McClurkin then sang Houston family favourite Stand, and filmmaker Tyler Perry stepped up to the podium and told the crowd, "Say whatever you want, God was for herand she is resting, singing with the angels".

Gospel star BeBe Winans fought back tears as he broke into a rendition of Home, while Bishop T.D. Jakes, who produced Houston's upcoming movie Sparkle, delivered a heartfelt speech and singer Kim Burrell belted out a specially-dedicated cover of Sam Cooke classic A Change Is Gonna Come to her late friend, remembering the singer's roots, rise to success, and untimely passing.

Actor Costner broke his silence about Houston's death to express his sadness at the tragic loss of his The Bodyguard co-star, stating, "Whitney returns home today to the place where it all began. And I urge us all inside and outside, across the nation and around the world to dry our tears,suspend our sorrow, and perhaps our anger, just long enough to remember the sweet miracle of Whitney".

And he continued, devastated by the idea that their friendship had beencut far too short.

He said, "I was your pretend bodyguard once, not too long ago and now you're gone, too soon, leaving us with memories, memories of a little girlwho stepped bravely in front of this church, in front of the ones that loved you first, in front of the ones that loved you best, and loved you the longest. Then bolder you stepped into the white hot light of the worldstage, and what you did is the rarest of achievements, you set the bar so high, that professional singers, your own colleagues, they don't want to sing that little country song (I Will Always Love You), what would be the point? Now the only ones who sing your song are young girls... who aredreaming of being you one day... So off you go Whitney, off you go".

An emotional Keys then took to the piano to perform Prelude to a Kiss and she choked back tears as she said, "I was just thinking about the way that it's so obvious that she just crept into everybody's heart and the way that she was such a beautiful human being. Really, really caring, beautiful, thoughtful, human being".

Longtime mentor and music producer Davis followed and kept his composure as he addressed the attendees "I can't tell you how moved, touched, inspired I am today by feeling the spirit in this great church and feeling the faith, it's helping me with my grief and my heavy heart... Personally, all I can say is that I loved her, very much. Whitney was purely and simply, one of a kind".

Musical tributes continued with R&B star R. Kelly, who crooned I Look to You, and Stevie Wonder, who paused to say, "This is such an emotional moment, I just want to stop and give our praise to God for allowing me to be in life at the same time as Whitney".

The ceremony was brought to a close with final goodbyes by the tragic beauty's sister-in-law and former manager Patricia Houston and singer Warwick, as CeCe Winans - Bobbi Kristina's godmother - brought down the housewith an uplifting performance of Don't Cry.

Winans ended the service by leading the church in song as she crooned aportion of Houston's favourite church hymn Jesus Loves Me and her brother, Pastor Marvin Winans, delivered a touching eulogy and rousing sermon.

The crowd then rose to stand for the final procession as Houston's casket was carried out of the building to her classic hit I Will Always Love You.

A heartbroken Ray J was seen reaching out to touch the casket as it passed by his church pew and had to be comforted by his sister Brandy as he broke down in tears.

The legend will be laid to rest on Sunday (20Feb12) next to her father John Russell Houston, Jr. at the Fairview Cemetery.

Houston was found dead in her hotel room bathtub at the Beverly Hilton in Los Angeles last Saturday (11Feb12), aged 48.

A cause of death has yetto be determined, but Los Angeles police officials have ruled out foul play. 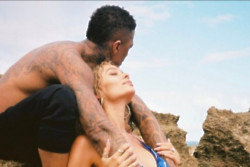 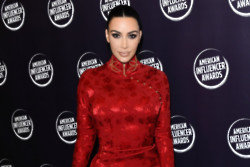 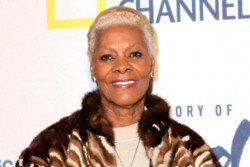