FAT MIKE VOWS TO CONTINUE HIS POLITICAL FIGHTNOFX frontman FAT MIKE has slammed his fellow Americans as being "homophobic", "uneducated" and "ethnocentric" for re-electing US President GEORGE W BUSH. The singer - real name MICHAEL BURKETT - runs PUNKVOTER, an organisation dedicated to educating America's youth against voting for the Bush administration.Punkvoter is supported by a wide range of US rock acts including GREEN DAY, FOO FIGHTERS, THE OFFSPRING and BLINK 182.But, now the election is over, Fat Mike has vowed to continue the fight against what he views to be a government that "has no interest" in its citizens.

He says, "I feel like I got hit with a sledgehammer. Nine million women voted for the first time because they are more afraid of gay marriage than terrorism.

"We're f**ked. But Punkvoter will continue to fight on. We succeeded in engaging hundred of thousands of voters with real reason why Bush truly sucks.

"Senator (and Presidential candidate JOHN) KERRY said that we need to come together and heal as a nation. F**k that. There's no f**king way I am going to come together with these homophobic, flag-waving, God-fearing, gun-toting, uneducated, isolationist, ethnocentric rednecks.

"We do not compromise or come together with them. We fight them and everything they stand for. We as a community have to take care of each other because apparently our current government has no interest in that. 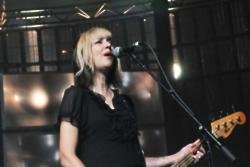