2010 was a huge year for The Courteeners. The release of their second album was quickly followed by months of touring and an unexpected EP release at the end of the year. Now Liam Fray is gearing up for another round of gigs and festivals this summer.

- After having such a massive year last year with Falcon, you then released an EP, what made you do that?

It basically came about with a close friend of mine in New York. We were sharing a bottle of whiskey and as it got near the bottom I said "you should do some artwork for us", she's an amazing artist, but we didn't have anything to release and the next album was gonna be ages away so I just got thinking and I had a couple of songs up my sleeve so we recorded them.

It was pretty difficult really because I had to fight tooth and nail with the label to release it. I'm really pleased that they allowed us to do so but to be honest it's kind of a pain having to fight for these things.

We put it out on a limited edition vinyl but they said nobody buys it anymore so that kind of thing really gets you down, you're in a band and all you want to do is give something back to your fans.

- Do you find you have to play the game more than you'd like to then?

I don't for one minute want to make it sound as if we are in anyway hard done by but being signed to a major label you start to realise that sometimes things don't go your way so all you have to do is make sure the things that you do have control over are exactly how you want them.

I can put my neck on the line and say that videos are not something I have control over and I'm sure you can tell that because they're all pretty f**king awful, so next time round, we're getting control over them.

So it's things like that you know, the label don't dictate what dates, we do, and it's been pretty good because they're not overly involved with our output. I know a lot of bands who have the label in the studio everyday and we just wouldn't f**king allow that.

- You mentioned the EP came off the back of your friend in New York, was that an influence in you doing the Yeah Yeah Yeah's cover?

No not at all. I've been a fan of the Yeah Yeah Yeah's since the master EP and I fell in love with the band and with the front woman and what she did on stage, it was like seeing Bowie or something, I couldn't take my eyes of her, she was electric.

So I've always loved their work and every album has been different and they've always pulled and pushed in different directions so that was why. It was a bit of a brave move for us to cover something like that.

- Were you trying to do something that people wouldn't expect?

Don't get me wrong, we are very happy to be part of that furniture, it's an honour, and we've done two albums and have a long way to go, but we never set out to be part of this Manchester collective.

The music that has come out of it is unbelievable and we were influenced by it but only as we were by the Sixties, or Motown or The Strokes or The Walkmen so it's good to say "you know what, I f**king love the Yeah Yeah Yeah's so I'm gonna cover them."

- You've seen massive success with both your albums, did you ever anticipate it?

Just to see a band like us who've come from playing the small venues in Manchester is great. I don't think it's happened since Elbow really so it's testament to our fans and it's a humbling thing...

When I write lyrics, I don't write for anybody else, you can't put yourself in the mindset of the person listening to it on the CD player because you'd get yourself in all sorts of f**king trouble, you'd end up writing a load of nonsense, but if I can write lyrics that connect with the audience and we're backing it up with the band, then happy days.

- With Falcon there was a new level of maturity, was that a conscious decision?

No. I think what happened is when St Jude came out I was 21 and singing songs I'd written I was 18, I still mean them today but once you've lived through it, it changes...if the lyrics are more mature that's just because we're more mature I suppose.

I think going to America really sorted our heads out, it just got us away from everything. It's difficult being in Manchester, surrounded by everybody, it's quite a small city so when we went to America it gave us a little bit of time to re-group and think about the music...

We had the keyboard and the acoustics on the bus with us for seven or eight weeks and as soon as we started getting the songs together we just came on leaps and bounds. I still love Jude and I still love playing it but I think it's really important for us to have moved on.

- Are you looking forward to festival season?

You can see certain bands who just aren't up for it and we treat every festival gig like it's our own. Some people are there to see you and some people aren't but you've got this platform to play your songs to a massive amount of people so the festivals are great.

Courteeners, Blossoms, Nothing But Thieves to headline Y Not 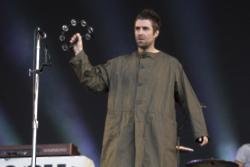