GLC's Rhys took over the FemaleFirst phonelines and talked animals and albums with DJ Dom Search.

Dom, hello my good friend, have you ever punched an animal?

You haven't really, have you?

I have, I've punched a dog and a snake.

A dog and a snake? I once saw a snake take a shit on a table once, that was a horrible thing to watch.

So, you're in a band now, and how long have you been in this band?

35? That's a good age, do you feel a little uneasy about yknow, being near middle age now?

Yeh, because my knees are going.

My knees are going too, I had trouble walking up the stairs earlier.

I've got a couple of grey hairs in my chin hair.

Yeh, kind of, kind of getting there. Are you married at all son?

Well you're wasting away now.

Yeh, I know better get on with it.

It's a ticking clock.

And what type of music is it you're making?

We make hip hop and dance music. With a bit of reggae.

How did you find yourself getting into that?

Well when I was younger there were two of us in the group and we were battle DJs.

Yehh lots of scratchin' and all that and through that we all got more into club DJing - playing loads of funk and soul, and reggae and hip hop and whatever was the feel from our fathers' record collections.

What was the first mixed tape you ever can remember?

I made loads of tapes when I was in my early teens, and they had lots of UK old school hip hop on them.

Did you make them as love tapes to give to women?

I am guilty of that, yeh! There were moments on the tape where we'd put a scratch for too long to try and impress the women.

Forget that, just put Glenn Medeiros on there. So that's how you got into the hip hop and the dance sort of thing, and you were doing the battle DJing in various clubs, any clubs that you were essentially involved with?

Yeh you probably did, if you're going to play anywhere in Cambridge that's where you'd probably play.

Yeh, lovely place, well it's probably a shit hole but...

It is a shit hole! Cambridge isn't very good for clubbing you see.

So you've been in this band for 12 years, have you had any releases? Any singles out... 12 inches and all that bollocks?

Yeh, yeh, loads of records out, I'm surprised you don't know who we are considering your a hiphop act.

Let's pretend we don't. So you've had loads of records out then?

Well yeh, loads of records. Most recently we did a record called 'Join the Dots,' and the lead single was called 'The Lion's Den' featuring Miss Dynatmite.

Miss Dynamite? MISS DYNAMIIITE! I thought she was dead? She's disappeared off the face of the earth! Or she punched someone in a club and then disappeared.

Yeh, she disappeared before that as well, but she's pretty much back now.

Did you have a look at her receding hairline?

Because she scrapes her hair back on her head... really tight.

I hadn't noticed it. I think she's hot.

Yeh, I think she's hot except for the receding hairline. If I went on a date with her I'd probably make her wear a hat.

Have you made the switch now from records to MP3s, and from CDs to them... laptop mixing things?

Yeh, we still use vinyl as well but we have moved over to Sirocco, it's a blessing.

You've still got the turn tables?

So you've still got the record jumping and skipping around, does that happen? I DJed for years and years, records are just f*ckin' ludicrous now, you go out with the CDs and you're just lugging these things across the country, it's incredibly different.

Well yeh it is, if you're job is a DJ and you're going abroad and stuff then a laptop is the best solution. I think that there are drawbacks, it doesn't sound as good as vinyl.

Do you get scared that someone's just going to launch a pint of beer over it?

Well they always launch the beer up anyway, we got used to that years ago!

I've figured this out right, they should make a waterproof laptop.

They should do, yeh.

Yeh, yeh I should try that, but I know what you mean. I actually worry that it's going to be my own pint.

Yeh, I've got my misses a laptop for Christmas because she keeps pouring water into it, she's gone through two laptops in a year.

Oh, that's no good is it, she's obviously a nutter!

Well, she's a spazz. It costs me a fortune.

What's the plan now, you've made records, you've hung out with Missy Elliot, or whatever her name was, what's her name?

That's it! What's the plan now then?

We're going on tour, so we're doing kind of the tail end to the album - we're going to Australia and New Zealand...

How the F... How'd you end up managing to go to Australia and New Zealand!?

Well we've been going for years, this is out eighth tour!

Well, it's our eighth tour of Australia and New Zealand.

(To Eggsy) Why Have we never been to Australia or New Zealand?

Eggsy: I don't know it's supposed to be wicked over there!

Why haven't you been? It's lovely over there!

I don't know - but they're like the British people but more racist!

So you know, we should be over there laughing at them.

I don't know why we've never been there, our manager's crap.

Yeh, your agent, yeh, you could go over there and sort of tailor your set for the Australians.

Yeh for the Australians, you know, we could talk about... Paul Hogan.

Yep. You could burn your skin a bit.

Burn my skin yeh, and we could go bush walking. Yeh that's fantastic, that's absolutely awesome. So do you have a good time over there? Are you really really looking forward to it!?

Yeh, as you can imagine we cut out about a month of the British winter and spend it on the beach, so you know...

When are you going there?

You're on a plane?

You'll touch down somewhere though, like Singapore or some shit.

Yeh. that's true but it'll only be about an hour!

Does that cost you a lot of money to go out there?

Well I don't pay for it.

What's happening with the future now? You got big plans? You going to try and blow something up or something?

Well, we're all gonna get back onto this tour now and make another record I think and maybe do it ourselves actually. We've been on several labels and now we're toying with the idea of you know, doing it the modern way like all these new groups.

Yeh, we're doing that as well.

Do you need any beats?

If you've got beats, I'm happy to present them to the boys and go, 'look boys! here's beats!" and we can collaberate.

So, 12 years in the game, are you still feeling it?

Yeh, I mean there's things that change a bit. I don't go out as much because obviously we're playing a lot so going out to a club is not my business anymore.

It's amazing how that works, you want to be a DJ and do all that but by the time you actually make it you don't want to go out...

Yeh, I mean it's all about the ear plugs these days.

Very much so, how does that work for you?

I take them out for the set but around that I try and keep them in because I'm definitely going deaf.

I've got these 15db reducers that you put in there like moulded ear plugs and I use them for when we're up playing and doing the gigs but when I go out Djing like you can't have one in and one out but when I get home from DJing and one of my ears, the one near the monitor, is like BBRRRRIIIGGGHH and you can't really hear out of it it's a nightmare!

Yeh and you get that thing, I don't know if you get it, where a few days later you actually lose a bit of your hearing in one ear for a bit, do you ever get that?

People monitor too loud, clubs are too f*ckin' loud.

But it's weird though, that is true but then you turn up to some places and the sound system is so embarassingly bad that you can't even do your job!

Yeh, as long as people are enjoying themselves.

Ten years and then you're all going to get in a bus and drive off a cliff?

Donkeys? I always liked the idea of an Ostrich farm

Well there you go!

You'd be surprised how big those bastards are!

Yeh, they're not funny. You haven't been to Australia yet! Go to Australia and you'll see how big those bastards are.

Yeh, Well listen it's been absolutely wonderful chatting to you and meeting you on the phone.

I guess that you'll have a fantastic Christmas on a plane, and maybe we could hook up next year.

Yeh, I'll get you some beats.

That'll be brilliant, thanks so much.

Find out what else the boys got up to below:

Goldie Lookin Chain On Food, Cars, Smoking and erm, why ‘Blackpool is full of mutants’

GLC Review: Biffy Clyro - Many Of Horror (When We Collide) 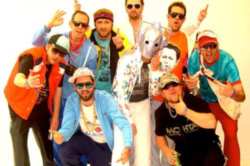