Calling Festival to be headlined by Aerosmith

Aerosmith are to headline Calling Festival this year.

The 'I Don't Want To Miss A Thing' hitmakers, who haven't performed in the UK for four years, will play the event in London's Clapham Common on Saturday, June 28.

The festival, formerly Hard Rock Calling, has been re-vamped and moved to a new site for 2014, which will feature multiple stages with 20 rock and pop acts on the bill, including Thunder, Walking Papers and Joe Bonamassa, who will perform throughout the weekend.

Aerosmith's Joe Perry said: "Speaking for myself I've been so involved writing my autobiography I did not realize how long it had been since we have played across the big pond."

Guitarist Joe added: "It¹s been far too long since we have performed in the UK. We can¹t wait to bring back some of the classics as well as some of the new songs from 'Music from Another Dimension' [2012 album]. We miss our UK fans. See you soon."

Tickets for the event go on sale on March 7, visit livenation.co.uk for more information and to book. 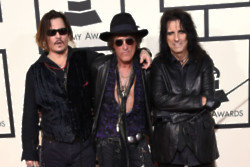