What does it take to fall in love? That's the question being asked in the emotional new trailer for upcoming movie The Sun Is Also A Star, which you can check out above.

Based on the acclaimed bestselling novel of the same name by Nicola Yoon, this big screen adaptation sees Ry Russo-Young in the director's chair whilst black-ish star Yara Shahidi and Riverdale's Charles Melton take on the leading roles of Natasha and Daniel respectively.

When Daniel saves Natasha from probable death, they begin to talk about life and the idea of 'love'. Natasha's not somebody who believes in the prospect, so Daniel takes his chance to prove to her that they could fall for one another in just 24 hours.

Soon revealing that she's facing a much bigger problem than a potential relationship however, Natasha tells Daniel that she and her family are actually only in the United States for the next day, and face deportation.

John Leguizamo also stars in the flick, with Tracy Oliver having written the screenplay. Leslie Morgenstein and Elysa Koplovitz Dutton are producers, and Pamela Hirsch serves as executive producer.

The Sun Is Also A Star will be released nationwide on August 9, 2019 by Warner Bros. Pictures. 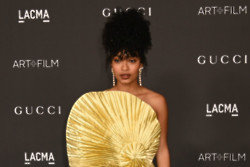