Gerard Butler says that working on an action movie is physically and mentally tough but is a rewarding experience.

The actor is back on the big screen this week as he leads an all star cast in Olympus Has Fallen.

The movie follows Butler's character as he tries to save the President from a terrorist attack that sees the White House fall.

But the actor says that a role such as this means a lot of preparation before the movie as well as a lot of work whilst filming.

Speaking to the Press Association the actor said: "Physically, you do those movies and you know you're signing up for a challenge. You gotta get pumped up, get big, look cut and athletic, and then you gotta get into the fight.

"You're training, you're doing all the choreography while you're trying to film and I'm training at the gym," he said.

"And then you get into the fight sequences. I had one fight sequence, which alone was three days of fighting, and every time you're doing that, when you get to a take, you gotta get back into the space that you are in so you're exhausted.

"You probably do about 200 takes, sometimes in a day, or especially over a couple of days. You get beaten up but that's part of it.

"By the way, that's the fun part of it in a way. The visceral, the experience and the adrenalin of making an action movie is very rewarding."

Olympus Has Fallen sees Butler team up with director Antoine Fuqua while Aaron Eckhart and Morgan Freeman are also on the cast list.

Olympus Has Fallen is out now. 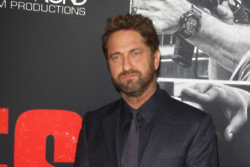 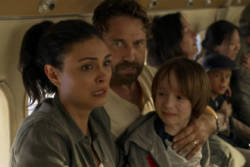 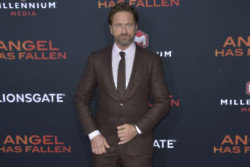