Dan Aykroyd says he is 'really happy' with what he has seen from the new Ghostbusters film so far.

The Ghostbusters reboot will hit the big screen next year and sees Paul Feig in the director's chair of this iconic franchise for the first time.

However, it is all change on the cast list as Kristen Wiig, Melissa McCarthy, Kate McKinnon, and Leslie Jones are set to come together to make up the Ghostbusters this time wound.

Aykroyd reveals that he is excited about the CGI advancements over the years and believes they will be able to 'do more' this time around.

Speaking to Entertainment Weekly, he said: "[Feig] has a great touch directing female actors and he really knows how to hit the female psyche and sensibility."

Feig has brought together a terrific supporting cast as Chris Hemsworth, Neil Casey, Andy Garcia, and Michael K. Williams are also on board.

And fans of the first two films are in for a treat as Aykroyd, Bill Murray, Ernie Hudson, Annie Potts and Sigourney Weaver are all set to cameo in the new movie.

Ghostbusters will be the first time that we have seen Feig in the director's chair since the success of Spy this summer. It will also be the fourth time that the filmmaker has teamed up with actress McCarthy; having worked together on Bridesmaids, The Heat, and Spy in recent years. 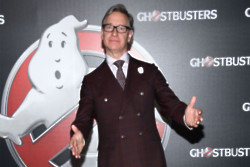