Cheryl has reportedly filmed a cameo role for Russell Brand's upcoming family fantasy film 'Four Children and It', which also stars the likes of Sir Michael Caine and 'The Crown' actor Matthew Goode.

Cheryl has reportedly filmed a cameo role for 'Four Children and It'. The former Girls Aloud singer was spotted arriving in Dublin on Monday (23.07.18), and it's said she has been lined up for a brief appearance in the big screen adaptation of Jacqueline Wilson's novel.

According to The Sun Online, Cheryl has since been seen on the set of the upcoming family adventure, which will star Russell Brand in the role of villain Tristan.

The story sees a group of kid come face-to-face with a magical creature with the power to grand wishes while they're on a holiday in Cornwall.

Sir Michael Caine will provide voice the titular It alongside 'The Crown' star Matthew Goode and 'Mission: Impossible' actress Paula Patton, with the latter playing the children's mum Alice.

Meanwhile, Russell previously claimed he was willing to give up his acting career to focus on political activism.

The outspoken star said back in 2014 that he was "not interested in making money anymore".

He explained: "It makes me scared if I think about money too much, then it makes me feel guilty. The only thing I tell the people who look after my money is, 'Make sure my f***ing taxes are 100 per cent legitimately paid,' and then I do my own s**t."

The British star subsequently revealed he was willing to sacrifice his career, and even his life, for his political beliefs.

He said: "I'd give up everything. I've thought about this a lot, whether or not I'm prepared to go to prison or die for what I believe in. 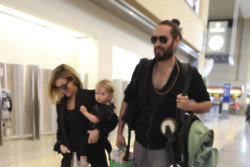