Alien: Covenant – Join the crew for ‘The Last Supper’

Ridley Scott is returning to the universe he created with upcoming big screen release, Alien: Covenant. As the next chapter in his iconic ALIEN franchise, fans will once again be able to board the ship along with a crew of talented space explorers, but what awaits them is something far worse than they could have imagined.

This time round, we meet the crew of new colony ship Covenant, bound for a remote planet on the far side of the galaxy which they believe is an uncharted paradise just waiting to be claimed. What they don’t understand however is that the new world has played house to one particular life form for some time.

In this brand new clip released this week by 20th Century Fox, the crew of the ship can all be seen getting along extremely well as they prepare for their life-changing journey. One bite of food however almost turns deadly, as one crew member almost takes a bite of their ‘Last Supper’.

Alien: Covenant comes to cinemas and IMAX in the UK in May, 2017. 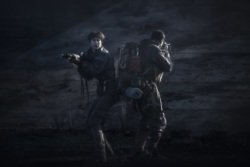