The actress describes her character in the upcoming film, as well as her experiences on set and more...

Starring in the lead role as Maddy in new film Everything, Everything, we can today share with readers an exclusive interview with the brilliant Amandla Stenberg, who discusses why she jumped on board with the film, what we should expect from her performance and more.

I thought it was a special story because it has a lot of heart. It felt real, and at the same time had an element of whimsy and fantasy. I also thought it was special because it features an interracial couple, which reflects what’s going on today with young people.

How would you describe your character, Maddy, and how did you connect with her?

Many of us sometimes feel trapped in our environments, and I was able to connect with Maddy’s feelings of feeling trapped or lonely, due to her illness. Maddy is really artistic and expressive and those are two ways she copes with her surroundings.

Maddy is also kind of a badass. She’s pretty daring and comes to a crossroads, where she has to decide if she’s going to continue living life the way she has been, or if she’s going to do something life-changing. Maddy ends up making the decision to change her life—one of many things that’s really special about her.

Maddy’s journey will inspire people to take risks and live life to the fullest, which sounds like a cliché, but it’s important and true.

Talk about Maddy’s relationship with Olly, played by Nick Robinson, and how it evolves.

Olly eventually becomes Maddy’s world because she doesn’t have many people in her life. So having this boy next door becomes everything to her.

What’s special about their relationship is its awkwardness and their being afraid to show themselves to each other. Maddy and Olly spend some time testing the waters and figuring out how to relate to each other, and experiencing that awkwardness of being a teenager and being in love for the first time.

Nick and I became close friends on the shoot and developed a really special bond. Part of that comes from being similar and connecting to each other; the other part was pretending to be in love with each other for a couple of months, which created a friendship that’s really special. Nick is brilliant in the role and brought a lot of nuances to it in a really special way.

Another central figure in Maddy’s life is her mom, Pauline, played by Anika Noni Rose. How does Maddy feel about her mother?

Maddy loves her mother, and there’s no reason why she shouldn’t, until she discovers a shocking secret. Much of the story is about a mother/daughter relationship in which the mother loves her daughter too much. She’s driven out of fear to protect Maddy, but that’s coming from a genuine place of love and caring.

Maddy is kind of the sun to Pauline’s Earth. Pauline is everything in Maddy’s life until she meets Olly and things are shaken up. Maddy has to learn how to let Pauline go and be her own, independent person.

This film reflects a lot of things we go through as teenagers. You just feel the need to disconnect or break away from your parents, in order to figure out who you are. That’s what Maddy is experiencing—but in a heightened way.

Did you develop a kind of mother-daughter bond with Anika?

Anika is really incredible and I feel so blessed to have worked with her. She was such a grounding presence for me on set and I learned a lot from her, even in terms of how to go through the script and break it down, and how to have a conversation about the lines, intonation, relationships and movement.

Often on set I felt like she was like my stepmother, which was really cool. This was actually the first film set on which I didn’t bring a parent with me. So it was challenging, and Anika gave me a lot of love, support and wisdom.

Much of the film was shot on soundstages and locations in Vancouver, British Columbia, Canada, but you wrapped the film on a beach in Mexico. What did you experience making that move?

It was incredible to go from a location that was cold and maybe a little dusty, because that’s how soundstages are, to a humid, fun and sun-splashed location with palm trees and beautiful beaches and fresh fruit. I remember that as soon as we got to Mexico, we took a boat ride from Puerto Vallarta to the private beach where we were filming. Nick and I sat on the boat and just looked at each other and shared this amazing moment.

But even in paradise, things can get a little scary. Tell us about your close encounter with a sudden storm.

For a scene where Nick and I are snorkeling, we were waiting in the water and I got this feeling in my gut. I looked up to the sky and saw it turning gray, and I knew something was about to happen. I turned to Nick and said, “I think it’s going to rain.” A second later these huge, fat droplets started dripping on us. The rain somehow enhanced the experience to be in the water.

Then came the first bolt of lightning—and this huge, thundering sound reverberated through the entire ocean. And we looked over at the crew, which was on a nearby catamaran, and they looked a little worried. We were told we all had to get out of the water, pronto, and so we started speeding towards the shore.

The private beach where the production was based had been evacuated due to the storm, so we had to speed directly towards land because it quickly became clear that this lightning storm was pretty dangerous.

Everyone was stumbling around the catamaran, which was being lurched from side to side, due to the storm. It was raining so hard that it created these huge rolling waves, unlike anything I’ve seen before. Every few minutes there’d be a huge lightning strike, and Nick and I sat huddled together in the corner counting the seconds between lightning strikes and thunder. We were terrified and excited—almost gleeful—because we felt like fishermen lost at sea, who were saying their goodbyes to the world. Well, maybe we were being a little over-dramatic, but that’s what it felt like!

You presented a unique gift to the crew, which reflects your interest in music. Tell us about that.

I think it’s really important to show your appreciation for the crew, and I always like to give really personal gifts. I took some of my favourite songs, adding a “suave’ DJ voiceover naming the tracks. I burned that onto a CD and added some personal artwork for the cover. I gave all the crew members a CD.

Speaking of artwork, I heard you did some other special drawings on some of the props?

I’m very passionate about visual art. The props department came to me and said, “We need drawings for this and we heard you like to draw. So if you feel like it, you can work on it.” I said, “Hell yeah. I’ll do this!”

I did a couple of abstract line drawings of Nick and of the state fish of Hawaii, the Humuhumunukunukuapua’a, which is one of Maddy’s beacons of light while she’s trapped inside of her house.

I also drew Maddy’s environment and things I thought she should be thinking about because the character is an artist, which you can see in the novel Everything, Everything. There are a lot of really cool drawings in the book that are part of Maddy’s diary entries, which she draws to keep herself sane.

What do you hope audiences take away from Everything, Everything?

We wanted the film to feel real, accessible and truthful. What I hope people take away from it is the idea that it’s okay to be yourself, even if you haven’t yet had much exposure to the outside world, and you feel like an outsider. You will be okay.

Everything, Everything hits cinemas across the UK on Friday, August 18. 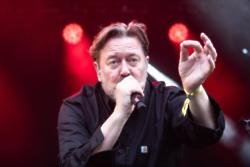 Elbow announced for Passport: Back to Our Roots benefit gigs