When you see Seth Rogen, Cameron Diaz and Christoph Waltz all come together on the same cast list there is the promise of an exciting movie.

Sadly this did not happen when all of the above joined forces for The Green Hornet - which was directed by Michel Gondry; we really have come to expect better from this filmmaker.

The Green Hornet was the first big bore of the year a movie where nothing really happens, poor casting and a group of actors that have simply no chemistry.

Following the death of his father, Britt Reid, heir to his father's large company, teams up with his late dad's assistant Kato to become a masked crime fighting team.

Apologies in  advance to all Michael Gondry fans was a major dud this  year despite Reid and Kato wanting to battle crime this is a film where nothing really happens - it really is so very boring.

Seth Rogen is so badly cast it’s unreal he has turned the character of Reid, who was a rather clever and sophisticated fellow in the past, into a bumbling fool who just jumps around screaming how about how ‘cool’ everything is.

Diaz and Wilkinson are barely used - there is a good cameo from James Franco - which Waltz once again show how great a villain he is.

Jay Chou is this movie’s one saving grace as he has all the best action and all the best lines - the film would be unwatchable without him!

Gondry has produced a really dumb and unfocused movie as he stumbles from one scene to another - instead of making an interesting action flick it’s just a jumbled pile of garbage.

Sadly Gondry and co have missed out on an opportunity to bring an action hero of old back to the big screen - let’s hope we won’t be seeing a sequel!

tagged in The Green Hornet 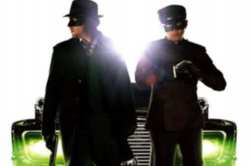