Rochelle Humes has banned her daughter from modelling. The 31-year-old star - who has Alaia-Mai, seven, and Valentina, three, with Marvin Humes - has revealed she recently blocked her youngest daughter from entering the modelling world.

Rochelle said: "Someone stopped me and asked if they could sign her to a little kids' agency and I was like, 'You have no idea what she would be like. No. If you want the shoot to last four days because she won't be listening, then sure.'"

Rochelle is currently pregnant with a baby boy, and she's decided to take a longer maternity leave this time around.

She explained: "He is due in four and a half weeks.

"I'm taking longer maternity leave this time than I've ever taken. It's a real treat for me to finish almost five weeks early."

Rochelle joined The Saturdays in 2007 and while many of her bandmates have subsequently gone on to forge solo careers, she's not interested in following the same path.

Rochelle - who has turned her attention to TV presenting in recent years - said on Instagram Live: "I've such fond memories and I love the girls, obviously, but no, I have no desire to do it by myself.

"I've got no desire to be in the studio doing a solo album."

The TV star has been educating her daughters on the Black Lives Matter protests in a way that is "suitable" for their ages, but that also keeps their innocence in mind.

She said: "I want her to be armed with the information but not pre-empt that people might think of her differently." 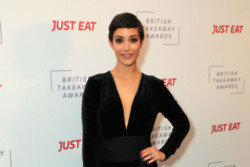