Courtney Love says couture fashion is 'over' her pay grade

Courtney Love has admitted that she can't afford current high end fashion pieces because they're too expensive.

The 54-year-old rock musician - the widow of late Nirvana frontman Kurt Cobain, who tragically died in 1994 - has revealed that she loves collecting vintage Dior items from the 1950s because it's her favourite era, however, the star admitted that she can't afford current high end fashion pieces because they're too expensive for her to buy.

Speaking to the New York Post newspaper, Courtney said: "I went to the Valentino Couture [last month] and it changed my life. [My former stylist] Arianne Phillips told me a long time ago to go to the couture [show] and it would change my life. And then it did. It was absolutely beautiful. I collect old Dior, I like 50s couture."

Opening up about the current cost of high-fashion couture, Courtney added: "Oh my God, it's way over my pay grade!"

The 'Malibu' singer - who has 26-year-old daughter Frances Bean Cobain from her relationship with Kurt - recently auctioned 43 pieces from her personal wardrobe on Heroine.com, to benefit the anti-bullying foundation Stand For Courage.

Courtney also confessed that she has kept her most treasured items in her closet because they are "meaningful" to her.

She said: "I have the [white silk] Versace dress from the Academy Awards, and some other ones that are meaningful like that and important in my life. But just by the skin of my teeth.

"I've moved a lot and had different habits in life, and I've attracted different people, and some of those people had sticky fingers and that's the way it goes. Yeah. Otherwise, I have a pretty good wardrobe." 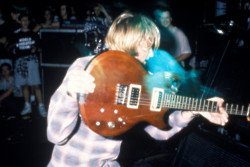 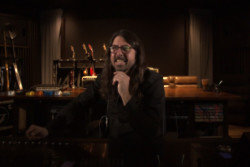