Do you know which germs are lurking under YOUR fingernails?

Our hands and fingers are an essential part of us that we use regularly without even thinking about it. It is amazing how many times we touch, feel and work with our hands throughout the day without giving it a second thought.

Most of us know to wash our hands frequently with hot soapy water, after using the toilet for instance, but have you ever wondered what might be hiding underneath your fingernails in those hard to reach areas even after you've washed?

Read on for 5 shocking truths about the germs that could be breeding under those 'clean looking' nails...

Your nails could be holding on to germs that will make you ill.

Hand hygiene is incredibly important, because many of the nasty bugs and infections (including those that cause vomiting and diarrohea) we pick up are contracted via our fingernails - and the area underneath the nail is a breeding ground for germs. In fact, holding on to one pole on a train or bus, is the equivalent of touching hands with at least 50 different people (who may or may not have recently washed their hands)!

Poor bathroom hygiene, contact with animals, and handling raw meat can all leave you at risk from picking up Norovirus and the campylobacter virus.

Artificial nails are the most unhygienic.

Next time you admire someone's manicure, think again. It is widely known that the average person carries more than 10 million bacteria on their hands day-to-day, but people who wear false nails could be carrying even more than that according to health experts1.

False fingernails are more likely to hold on to harmful bacteria than natural nails because they are usually longer and are more difficult to keep clean. Not only that, most artificial nails often look cleaner, but mask the dirt and grime building up underneath.

Men are grubbier than women.

Come on girls, we've all suspected this! According to Dr Anthony Hilton, a microbiologist from Aston University in Birmingham, one in five men do not wash their hands with soap and water after using a toilet!

Nail biters are at greater risk.

By biting your nails, you are not only transferring more germs from your mouth to your hands, nail biters also physically ingest the germs hiding out under the nails - yuck!

For instance when scientists at Birmingham's Aston University carried out tests on nail clippings from 100 men and women3, they discovered infectious traces of bacteria called enterobacteriaceae (which includes Salmonella and E. coli in its family) which can cause diarrhoea and vomiting.

So what's a hygiene-conscious person to do? Many health experts agree that the best way to clean out the unwanted gunk from under your nails is by using a nail brush, but even they can harbour germs if they are left on the side of the bathroom sink for too long as they can't be sanitised properly.

Now Emma Myer, a beauty therapist and former cabin crew member for British Airways, has developed the revolutionary BRUZZ nail brush. Unlike regular nail brushes, the unique design of the BRUZZ cleans the top, underside and tip of the nail in one simple action and the multi-direction cleaning and antibacterial bristles, which are impregnated with softening vanilla extract, ensure the ultimate in hygiene as well as helping to keep nails beautifully healthy and smelling gorgeous.

Driven to develop the BRUZZ nail brush while meticulously clean nails were an essential part of her job, Emma has also put together some quick and helpful tips about how to keep your hands in tip-top hygienic condition and avoid under-the-nail nasties!

It sounds like such a simple task...and it is, but it is only effective if you are doing it correctly! Proper hand washing requires soap and water and should last for at least 15 to 30 seconds. Reciting something such as the alphabet is a good tip to follow to ensure you are washing your hands for long enough.

Soap breaks down the grease and dirt that carries most germs. Make sure that you are reaching all areas of your hands and not just rubbing the palms together. When hand washing, make sure you include all these areas;

In certain professions it is a requirement that you wear surgical gloves when preparing food or touching someone else (such as a dentist). However, applying this rule in the household will help stop the spread of germs. They are not an expensive item to buy and could help stop the spread of germs such as the campylobacter virus, which causes food poisoning. Wearing surgical or latex gloves when handling raw poultry means that once the chicken or turkey has been prepared and in a roasting tin, the gloves can be taken off and disposed of. This cuts the risk of spreading the virus onto the kitchen taps when washing your hands and cuts the risk of it spreading it onto other food items.

One of the main reasons fingernails hold on to germs is because it is particularly hard to clean underneath thoroughly, so dirt and bacteria gets trapped and stays there.

A simple squeeze of liquid soap into the centre of the BRUZZ will get to work on grubby nails. Unlike a standard nail brush, the ergonomic ball design of the BRUZZ keeps all of the liquid contained inside to prevent excess water and soap spray splattering the bathroom and because the bristles are shielded they won't be exposed to airborne germs and bacteria.

The removable soft-touch bristles make it easy to clean and are even dishwasher safe for long-lasting results, and the gentle brushing action gives nails a simultaneous massage whilst it cleans. Using a nail brush and scrubbing your nails daily will help with the build up of dirt.

Top up with sanitiser

Carrying a hand sanitiser with you when you travel is always a good idea for when you are unable to wash your hands. Even taking it down the shops with you will help protect your from nasty germs on bus hand rails, shopping trolley handles and traffic light buttons.

Door handles to public toilets are a catch 22 situation for example. Because you may have washed your hands then have to pull open the door which someone previously may have done without washing their hands first. If there is no tissue to hand (and you don't really want to bust out the latex gloves in public) then topping up with sanitiser is a simple yet effective solution.

It is also handy to keep around the house to use after washing your hands, as taps and sinks are one of the worst culprits for growing harmful bacteria.

In addition to natural nails, the BRUZZ can be used on acrylics, gels, gel polish, fibreglass and all kinds of nail art (including 3D) and even on toes. It can also be used dry as a dusting brush.

The BRUZZ is available in hot pink, blue and white and costs £9.99 from Boots stores and Boots.com. 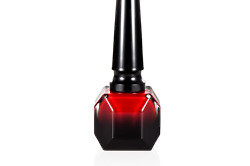 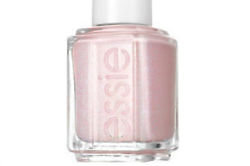 Spring Nails from Essie at lookfantastic.com 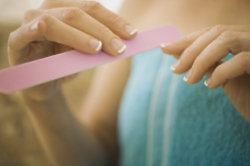 How to look after your nails