Seasonal Affective Disorder and Sleep: What is the Link?

Do the colder months affect your mood?

Feel a bit down during the winter months, or especially tired in the run-up to Christmas? You may be a Seasonal Affective Disorder (SAD) sufferer. Far from merely being an excuse for lack of productivity at work as the days get darker, SAD is an accepted strand of winter depression prevalent between the months of September and April, mainly occurring from December to February.

Speaking to Time4Sleep, Dr Adrian Williams, of the London Sleep Centre, explained: "The main symptoms are those typical for depression which is altered mood, reduced energy and fatigue, along with others including hypersomnia or sleepiness, increased appetite and eating, carbohydrate craving and consequent weight gain." Whilst low energy is perfectly normal in winter months, in most cases the other symptoms are not caused by the shift in seasons.

A lack of sunlight during this period appears to be the main medical reasoning behind the disorder. Helen Hanson, SAD Association (SADA) member, said it: "creates a biochemical imbalance in the hypothalamus, a part of the brain which regulates a wide spectrum of body functions".

Influence of location on cases

Around six to seven per cent of the UK population are thought to suffer from the disorder in an observable manner, whereas around twice that number are thought to show mild signs. This is only part of the story, however; the number of sufferers can differ greatly between regions too. Ms Hanson recalls "a GP from Wales on the SADA committee who reported more referrals from one side of the valley where people lived in the shadow of pits and pinewoods".  Dr Williams also claims that the more northern the latitude, the more susceptible individuals are to SAD, with Northern Ireland and Scotland showing especially high numbers of sufferers.

With regards to differences between the sexes, the split is fairly even among the young. By the time they have reached the middle-age group, women have moved ahead and are affected three to four times more frequently than men, whereas there is a decline in reported cases in the older generation. This data does come with a caveat, according to Ms Hanson: "We used to think that SAD affected more women than men but this is not strictly true. Women were more likely to admit to it and to seek help. It now seems to be prevalent in both sexes and can start at any age."

Link between SAD and sleep

It is generally accepted that a strong link exists between SAD and sleep (or lack thereof). Ms Hanson provided a scientific explanation: "The nerve centres in the brain controlling our daily rhythms and moods are stimulated by the amount of light entering the eyes. During the night the pineal gland produces melatonin which makes us drowsy and supresses the production of serotonin. At daybreak the light stops this process, but on dull days, especially indoors, not enough light is available to trigger this process. Our circadian rhythms become disrupted and so do our sleep patterns."

Light therapy is the initial treatment for SAD. Using a light box for half an hour each morning is recommended during the trouble period in order to simulate actual sunlight and wake up the sufferer more naturally. A new method of technological treatment is now available in the form of light earphones. Dr Williams stated: "There is literature which is intriguing but not yet confirmed of a light-emitting diode in an ear canal that can replicate light exposure through the eye!"

General good sleep hygiene practices can also help to alleviate the symptoms of SAD. These include reducing caffeine consumption from mid-afternoon onwards, avoiding alcohol three hours before going to bed and sleeping in a completely dark room, amongst a host of other common-sense tips to help you sleep.

What you eat can also help reduce the effects of SAD, with the Omega 3 and Vitamin D-producing super-fish mackerel being especially helpful. Just in time for Christmas, turkey is coincidentally a fantastic source of serotonin, and is perfect to top-up depleted resources during the darker months. Avoidance of the stereotypical 'comfort-eating foods' is also recommended, with sugar-heavy foods such as cake being unfavourable for a good night's sleep.

If the above do not help, there are of course some medicinal treatment methods to help minimise the impact of SAD. Timed melatonin taken three hours before bed may be beneficial along with traditional, non-sedative antidepressant drugs. Cognitive behavioural and complementary therapies would be useful too, and Ms Hanson added: "Other therapies may help us deal with the fact that we have SAD because we need to live with it rather than 'cure' it."

Above all else though, light therapy should always be the first port of call as lack of light is the main causal factor. 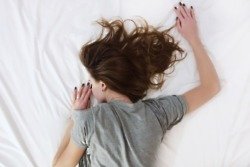