Rachel Brown-Finnis has been a leader in the growth of women's football in England in recent years and the BT Sport pundit sat down with Female First for an exclusive chat about the growth of the game and why more improvements are needed. 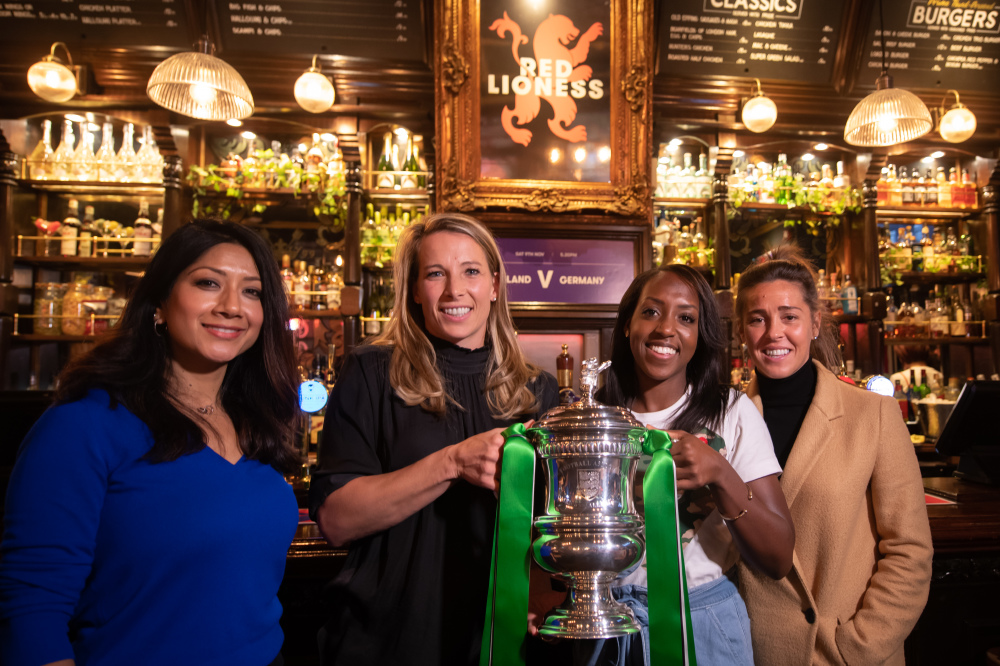 We saw a crowd of 77,768 for a women's international at Wembley earlier this month and big crowds for Women's Super League games, so what needs to happen next for the sport?

We have had a wonderful few weeks for the game in this country, with the huge crowd at Wembley for the England v Germany game backed up by the success of Women's Football Weekend. We are making history on a regular basis and that shows that progress is being made and it was also great to see the FA inviting so many former England players to the Germany game in what was something of a first as well.

How do you explain the big crowds for that international game at Wembley and a handful of Women's Super League games and the attendances of 300 and 400 we see for some league games?

It is an ever-present frustration for the domestic game that we are still getting low attendances for a lot of the WSL games each weekend. You come from being in the World Cup semi-final and knowing how many people have watched it on the TV and you walk away from that and you play your first league game and the crowd is so small, it is difficult.

We have had some big success this season, with the Manchester derby game drawing 31,000 and we have also seen big crowds at Chelsea and Tottenham when matches have been played at the club's main stadium, but we need to get those crowds going consistently to watch women's football.

Tell us about BT Sport's drive to get women's matches shown in pubs up and down the country?

This is all process of normalising women's football. It was a big step last summer to get all World Cup games live on mainstream TV and the audiences those matches attracted confirmed a lot of people will watch the women's game.

We now have a lot more WSL games on BT Sport and much more on the FA app, so there is an opportunity for everyone to engage in women's football and it will take time for us to get to where we want to be.

So you feel there is still a lot that needs to be done to make women's football a mainstream sport?

We have had some giant leaps in recent years and seeing a crowd of more than 77,000 at Wembley for a women's game was incredible, but there is still a long way to go before women's football is something people look for and go to watch on a regular basis.

We want to get people to a women's football match because it is a very family-friendly environment around at the grounds and everyone who goes to games seems to enjoy the experience. We need to expand the fanbase for women's football and have already made a very good starting point on that in the last few years.

The more it becomes the norm to watch a women's game and then support the men's team in the same way when they play, the better it will be for our sport and hopefully we will see those attendances rising and more women and young girls playing football.

We have not seen women pundits on Sky Sports or BT Sport for men's games so far this season as they have focused on using male pundits. Is that a concern?

I'm pretty sure that as soon as Alex Scott wins Strictly Come Dancing she will be back on Sky as a pundit and I have a couple of men's game to cover for BT Sport before Christmas, so it is brilliant that we are being respected for our opinions. Whether we are talking about men's or women's football, we have a lot of experience in the game on a number of levels and we can contribute to a debut on the sport.

People like myself and Alex have more than enough experience to offer something different to the viewer and I hope that people agree we have shown that we can articulate it the viewers.

That has been normalised in the last year or so with myself, Alex and Sue Smith getting a chance to be regular pundits on mainstream channels.

Do we still need more female voices on football coverage?

One thing I would never agree with his tokenism and while some businesses have quota systems in terms of women employees, that is not something I would support. You have to first and foremost prove that you are the best person for the job and that has to be the No1 criteria.

It is wonderful to see more and more women working on Premier League football both as presenters and pundits and it reflects how the world has changed over the last 25 years.

BT’s The Red Lioness Pledge is asking pubs and clubs around the UK to show women’s football. Ask your local to join in at btsportprint.co.uk/redlioness

A week in the world of women's sport: T20 World Cup glory for Australia in front of record crowd

A week in the world of women's sport: Storm Ciara causes havoc in WSL and Women's Six Nations