They were laughing and smiling throughout the meal, which lasted two hours

Hollywood star Liv Tyler has found love with Elizabeth Hurley's multimillionaire ex-boyfriend Steve Bing, according to tabloid reports.Tyler, 31 who has been single since splitting with husband Royston Langdon earlier this year (08), was reportedly spotted enjoying a romantic meal with movie producer Bing in Los Angeles on 30 November (08).According to Star magazine, Bing, 43 - the father of Hurley's six year old son Damian - has been pursuing the Armageddon actress for some time.A source tells Star, "She was determined to make a good impression."They were laughing and smiling throughout the meal, which lasted two hours".
STUMBLE SHARE SHARE TWEET PIN 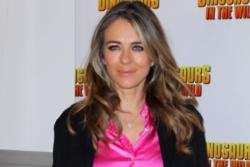 Elizabeth Hurley: Juggling a career and motherhood is 'hard'