Former supermodel Stephanie Seymour stands to lose her kids after her estranged husband asked a judge for sole custody.

Seymour filed for divorce from Peter Brant in March (09) after nearly 14 years of marriage, and the couple has been waging a war of words ever since.

The former catwalk star even accused her former partner of monitoring her movements by placing a Global Positioning System tracker device on hercar.

But now Brant is seeking full custody of their three children - becausethe former model has repeatedly submitted invalid urine samples for her drugs and alcohol tests.

Another test was submitted earlier this month (Oct09), but the sample wasn't at the minimum valid temperature required.

Brant has also accused Seymour and a moving crew of breaking into theirshared Florida property and stealing $700,000 (£466,667) of goods.

He is requesting sole custody of the children and has asked the judge to reduce Seymour's allocated time spent with them, as well as ordering her to give up booze and attend Alcoholics Anonymous meetings. 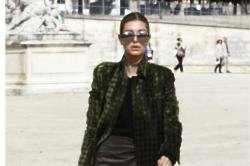