A New York judge has given his seal of approval to a child support settlement between supermodel Linda Evangelista and Francois-Henri Pinault, ending their nasty court battle.

We are happy that we were able to reach an agreement for the benefit and well-being of our son, Augie

A trial between the former runway beauty and her French billionaire ex began in Manhattan Family Court last week (ends04May12), after Evangelista demanded a massive $46,000 (£28,750)-a-month to support her five-year-old son Augustin James, who was conceived while Pinault was briefly separated from his now-wife, actress Salma Hayek.

During the explosive proceedings, the court heard how Pinault had allegedly told the model to have an abortion, while the fashion mogul opened up about the difficulties Hayek had experienced while she was pregnant with their daughter Valentina, who they feared would be born with Down syndrome.

But the pair decided to put an end to the revealing hearings on Monday (07May12) when it was announced the exes had managed to reach a financialagreement.

The settlement plan was signed off by a judge on Tuesday (08May12), although the details of the deal have been sealed.

In a joint statement, Evangelista and Pinault say "We are happy that we were able to reach an agreement for the benefit and well-being of our son, Augie". 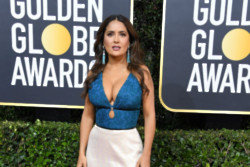