Wrestler Kurt Angle Charged With Driving Under The Influence

Wrestler Kurt Angle has been formally charged with driving under the influence (DUI), after he was stopped by Pennsylvania police last Friday (28Sep07). The former Olympic gold medallist, 38, was spotted driving erratically in his white Cadillac Escalade after leaving a bar on 28 September. Witnesses handed over the registration information of Angle's vehicle to local authorities, who traced the car to his home in Moon Township.Angle, who showed "signs of intoxication" and failed a field sobriety test, confessed to the DUI charge before being taken into custody.A hearing has yet to be set, reports tmz. This is the second spot of controversy the wrestler has found himself in this year after it was suggested by a sports publication that Angle used performance enhancing drugs.His name was discovered on a client database at an establishment that is suspected of distributing the steroids.

However Angle staed on his website that he did improperly recieve any perscriptions. 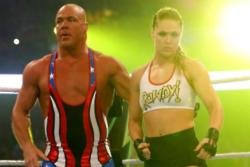