Actress Florence Henderson has revealed she once cheated on her husband and had an affair with a former New York City mayor.

What a way to put the kibosh on a relationship

Henderson, who portrayed beloved Carol Brady on the popular American hit TV sitcom The Brady Bunch, admits she once had a one-night-stand with married politician John Lindsay in her new memoir, Life is Not a Stage.

But the actress claims the encounter wasn't exactly perfect - she awokethe next morning to find she had contracted a sexually-transmitted disease, pubic lice.

She adds, "Guess I learned the hard way that crabs do not discriminate,but cross over all socio-economic strata... He must have had quite the active life. What a way to put the kibosh on a relationship".

Lindsay felt so guilty about the incident he sent flowers to the star to apologise. 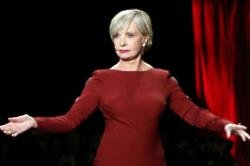