The Raging Bull icon championed Cooper to land the role of his son Pat, and for a brief moment even entertained the idea of having the 37-year-old's mom, Gloria, join the project to complete their family.

De Niro went as far as to speak to director David O.

Russell about his casting ideas, even though Gloria had never acted before, and thought she would be perfect because the Coopers hail from Philadelphia, Pennsylvania, the same town as the movie family.

Cooper admits he began to worry that his co-star was serious about bringing his mom onboard until producers found actress Jacki Weaver as the perfect replacement.

Recalling the moment De Niro proposed the plan, The Hangover hunk says, "I was like, 'What?' (De Niro said) 'I'll talk to Dave, maybe your mom should play your mom'. And he literally called Dave and said, 'Maybe Mrs Cooper plays my wife'. And we were gonna screen test my mom to play (Dolores) and then Jacki (came along)..".

Gloria stuck around the set to offer Weaver tips on how to portray a typical Philadelphia matriarch and the two women grew so close, the Animal Kingdom actress actually began to act like Cooper's own mom would.

Cooper explains, "Jacki spent so much time with my mom and Jacki's the same height as my mother, so she kinda, like, plays my mom in the movie. I don't know what he (De Niro) was talking about (casting Gloria), I literally don't know what he was thinking..".

It seems Russell got the casting just right - the group of stars have already landed an ensemble nomination for the 2013 Screen Actors Guild Awards, while the movie has also earned a slew of nods for the Golden Globes. 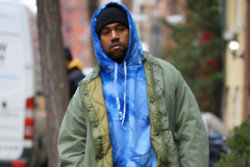 Have they or haven't they? Kanye West and Irina Shayk reportedly call it quits