The 'Star Trek: Into Darkness' actor - who recently split up with 'Glee' star Jonathan Groff after they struggled to make time for each other due to their busy filming schedules - has reportedly struck up a romance with the 24-year-old model.

A source, who spotted Zachary, 36, and Miles together at the 'Butler' after-party in New York this week, told the New York Daily News: "They were making out and couldn't take their eyes off each other. They have been getting closer over the last few weeks. There are definitely sparks there."

Zachary and Jonathan, 28, went public with their romance in September 2012, just one year after 'Heroes' star Zachary came out as gay, but they found it difficult to spend time together because they were both so busy.

A friend recently explained: "Zach being away and filming was not easy on them. Now he's going to be in New York with his new play ['The Glass Menagerie']. They really loved each other, so it wasn't an easy split.

"It just ran its course. Zach has been out and about and he seems fine."

Zachary previously confessed that he hadn't been in a healthy relationship with anyone until meeting Broadway star Jonathan.

He said: "I'm incredibly happy, I'm incredibly lucky. [In the past] I found myself in a pattern of being attracted to people who were somehow unavailable, and what I found was that I was protecting myself because I equated the idea of connection and love with trauma and death." 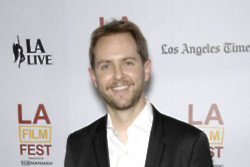 Zachary Quinto and Jacob Elordi starring in He Went That Way